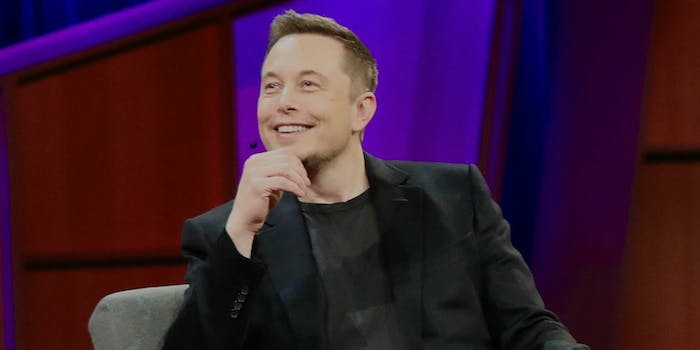 Twitter is locking accounts with ‘Elon Musk’ in the display name

There are a lot of people trying to be Elon Musk on Twitter.

Over the weekend, several Twitter users reported that their accounts became locked after they wrote “Elon Musk” in their display name. Using the name of the CEO of Tesla and SpaceX, even as an obvious joke, apparently flagged an unverified account as spam.

i made a fake elon musk accnt called “cool elon musk,” tweeted “just watched 500 days of summer” and it was immediately blocked lmao

Users whose accounts were blocked had to prove that they weren’t bots by passing a CAPTCHA test and verifying a phone number.

As users pointed out in the above tweets, the lockouts show that Twitter has the tools that could be used to fight harassment and block Nazis on the service. The company is instead using these tools to flag people who want to impersonate Musk.

“As part of our commitment to serve the public conversation, we’re continuing to fight spam and other malicious behaviors on our service,” a Twitter spokesperson told the Daily Dot in a statement. “This is an evolving challenge. As such, we’re rapidly developing our response to be more agile and effective in detecting these behaviors and enforcing our policies—particularly as it relates to deceptive cryptocurrency accounts in violation of our spam rules.”

In late June, Twitter announced that it was acquiring Smyte, a tech company focused on combating online spam and abuse. Twitter said that it was working with the team from Smyte to look for “new tactics for detecting and removing malicious accounts,” and apparently that includes locking accounts that could potentially be spam.

Twitter did not offer a comment on why the service was prioritizing people who use Musk’s name in this effort to fight spam. It also would not reveal if the service was locking accounts for people who displayed the names of other public figures or celebrities.

Musk has been very active on Twitter in recent months, and he often replies to fans (or non-fans) who mention him. Twitter users have reported an increase in bots that use Musk’s name and photo.

But as the Verge reported, people who went through the steps to unlock their account were still able to keep “Elon Musk” in their display name. That’s good, since making dumb jokes or using a pseudonym in your display name is one of the few things that makes Twitter still fun to use.