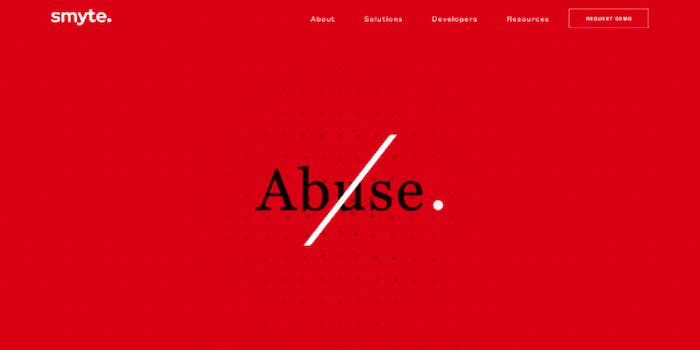 Will Smyte help Twitter with its endless troll and harassment problems?

Twitter has a long history of dealing with trolls, abuse, and harassment on its social media platform. Over the past few years, it’s gotten more serious about its efforts, but it’s latest move may be the biggest yet. Twitter announced Thursday it would be acquiring San Francisco startup Smyte, which makes anti-abuse technology, TechCrunch reports.

According to Smyte’s website, which has turned into little more than a placeholder for an announcement on its acquisition by Twitter, the company was founded three years ago in order to help keep people safe online. Led by former Instagram and Google engineers, the startup deals with issues like abuse, spam, and fraud.

Twitter hopes that this acquisition will help the company continue to improve the health of its network—an endeavor it announced back in March.

“Smyte’s team, technology and company mission are aligned with our focus on improving the health of conversation on Twitter, and we believe this will be a powerful addition to our ongoing work,” Twitter wrote in a blog post Thursday.

It says that it plans to use Smyte’s technology to address safety, spam, and security issues faster and more effectively. Twitter also says that Smyte’s “review tools and processes will be powerful additions” to its own existing safety tools. Twitter will be integrating this acquired technology into its operation over the coming months.

In the past, Twitter has tried a variety of tactics to improve the toxicity of its social network. It announced a multi-pronged plan, which included identifying and preventing repeat harassers from rejoining the network, in early 2017. In May, the site began looking for behavioral signals that identify trolls and making their activity less visible on the platform. And in March, Twitter CEO Jack Dorsey put out the call for experts to share their ideas on how Twitter could improve the health of its app.

Smyte is Twitter’s first acquisition since 2016.