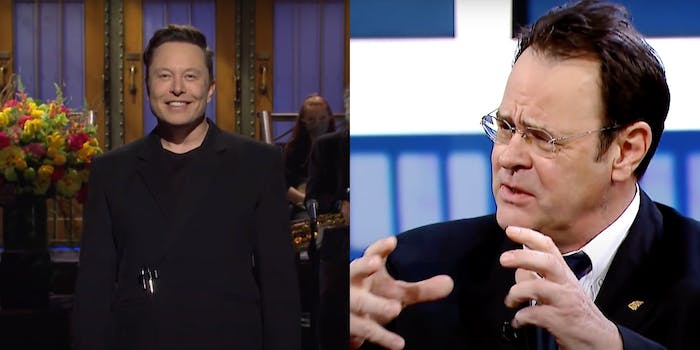 ‘Dan Aykroyd was the first’: Viewers remind Elon Musk that he’s not the first ‘SNL’ host with high-functioning autism

'Either he said it without doing one simple google search, or he did the search and didn't care.'

While hosting NBC’s Saturday Night Live, billionaire Elon Musk claimed he made history by being the first person with high-functioning autism, formerly termed “Asperger’s Syndrome,” to host the show. His comments were met with corrections as social media showed him he isn’t the first.

“Or at least the first to admit it,” he said during the monologue. However, many noted that Dan Aykroyd, a famed SNL alum and actor known to be on the autistic spectrum, also hosted the show. He hosted the 28th season finale in 2003 and has credited his diagnosis for the positive aspects of his career.

“One of my symptoms included my obsession with ghosts and law enforcement — I carry around a police badge with me, for example,” Aykroyd once said. “I became obsessed by Hans Holzer, the greatest ghost hunter ever. That’s when the idea of my film Ghostbusters was born.”

People online were quick to call Musk out for not giving credit where credit is due. “Either he said it without doing one simple google search, or he did the search and didn’t care,” one viewer wrote on Twitter.

Tesla and Space X head stated, “It’s an honor to be hosting Saturday Night Live,” continuing his insistence on the sentiment.

“Sometimes after I say something, I have to say, ‘I mean that,'” explained Musk, since there is oftentimes little variation in tone in his speaking voice. One of the symptoms of an Autism Spectrum Disorder (ASD) is not smiling or showing expressions related to humor, i.e., not laughing even if one finds something funny.

Musk’s use of the term “Asperger’s” was also criticized by many. The condition was named after Austrian physician Hans Asperger, a pediatrician with direct Nazi Third Reich connections.

And some critics still could not manage to root for Musk, even with some kinship in the diagnosis. Jeremy Wein wrote: “I speak as someone with Aspergers, Elon Musk can truly fuck off.”