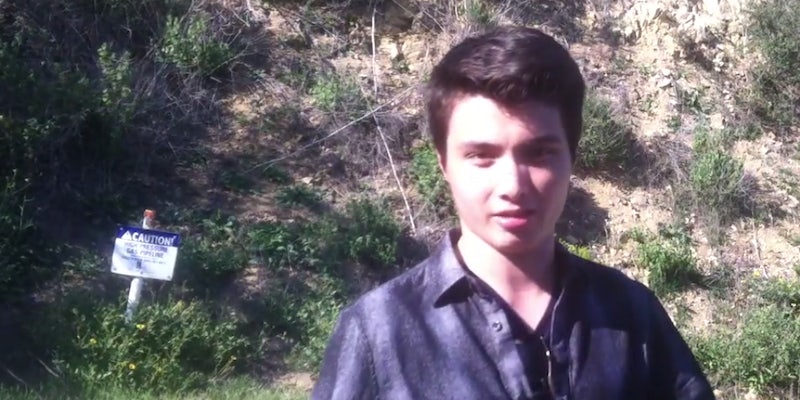 "He probably was a nice gentleman guy who just got rejected by women into insanity."

Elliot Rodger killed six people on Saturday, and strangely, some people seem to sympathize with him. This sympathy isn’t just for his public status as a victim of mental illness, but for the reasons that drove him to open fire on a street full of innocent bystanders.

On Saturday, 22-year-old Elliot Rodger stabbed his three roommates before driving through Alta Vista, Calif., shooting at random passers-by. Already, people are examining the YouTube videos he left behind, where he spoke about his loneliness, virginity, and bitterness toward women. This shooting was a premeditated attack, a day of “retribution” against the college girls who rejected his advances.

“You girls have never been attracted to me,” he said in one video. “I don’t know why you’ve never been attracted to me, but I’ll punish you all for it. It’s an injustice—a crime. I’m the perfect guy, yet you throw yourself at all these obnoxious men instead of me, a supreme gentleman… If I can’t have you, girls, I will destroy you. You denied me a happy life, and in turn I will deny you a life.”

Feeling cheated by the fact that women refused to have sex with him, he decided to take revenge. And judging by reactions on social media and comments on his YouTube videos, some men appear to understand this.

One comment on his final video reads, “I honestly think that every average looking really nice guy who’s watched the hottest girls hook up with cocky creatine loaded frat boys feels a little bit of what he’s talking about. He probably was a nice gentleman guy who just got rejected by women into insanity. Especially if he kept at trying to be a nice guy and it never worked.”

Many other comments suggest that the “problem” would have been solved if he just visited a prostitute. On the Reddit forum for PUAhate, an anti-pick-up artist community that Rodger used to frequent, one of the top threads is titled, “Will American women become nicer after today’s attempt?” Meanwhile, social media is full of jokes about Rodger being driven to kill as a result of women “friendzoning” him.

These comments all point towards a horrifyingly common belief: that being rejected by women is an understandable motive for murder.

I understand Elliot Rodger, a friendzone can strip a man’s powers away lol

Friendzoning. “Nice guys” and “gentlemen” who loathe the women who choose to date other men. “Incel” or “involuntary celibacy,” a term primarily used by men who feel entitled to sex from women. (For example: “When I hear a woman tell me that I shouldn’t feel bad about having gone without for so long, after all it’s only just sex, I feel like disfiguring her face with a scalpel.”)

It’s this type of rhetoric that quickly led people to link Rodger to the men’s rights movement.

If you haven’t heard of men’s rights activism before, the term may sound relatively innocuous. At face value, it’s umbrella title for people who campaign against anti-male discrimination. A popular example is the campaign for better visitation rights for divorced dads.

However, MRAs are far better known for simply campaigning against feminism, perceiving men to be the new oppressed underclass in modern society. Little to no attention is paid to issues like discrimination against trans men in everyday life, or against young black men in the legal system. Instead, a lot of high-profile men’s rights activities are just backlash against feminism’s ongoing struggle for equality between the sexes.

MRAs have campaigned against the criminalization of marital rape, fought for the “freedom” to make rape jokes on Facebook, trolled a college with hundreds of fake rape reports, and driven a feminist blogger into hiding. The Southern Poverty Law Centre tracks the men’s rights Movement as a hate group, alongside organizations like the KKK and the Westboro Baptist Church.

On the main subReddit for MRAs, most commenters are quick to distance themselves from Rodger. Essentially, this is a rush toward that old chestnut, “Not All Men.” This time, it’s “Not All MRAs.” Not all MRAs are like Elliot Rodger, obviously. The problem is, Elliot Rodger’s vitriolic rants are indistinguishable from the kind of language associated with many men who believe in the MRA message.

“The bodies of the victims haven’t even gone cold and the anti-mrm brigade are already using this tragedy as an excuse to tarnish the entire movement?” writes one MRA, succinctly highlighting the community’s focus on protecting their public image from associations with Rodger.

not even gonna start on the bullshit of people crying “not all men!” while simultaneously branding all mentally ill people violent/killers

Rodger’s mental illness is already a popular topic of discussion. As is often the case when an affluent, white-passing young man decides to go on a killing spree, we are treated to a sudden influx of mentions that he was in therapy.

But mental illness doesn’t cause this type of virulent misogynist rhetoric to materialize inside a person’s brain, unaided. And bringing Rodger’s Asperger Syndrome into the conversation can be seen as little more than an insult to everyone else with Asperger’s.

Rodger’s YouTube videos tell a tale of loneliness and rage, expressed in language that was certainly inspired and enabled by men’s rights culture. Specifically, the “right” for men to get laid, and the resulting rage when women ignore them.

Most horrifying thing about that Elliot Rodger video was that it was just a more murderous version of every friendzone/nice guy speech.

The concepts of “nice guys” and “friendzoning” are so common that the Nice Guys Of OkCupid blog has inspired dozens of parodies and copycats. The conceit is a catalog of self-professed “old-fashioned gentlemen” or “nice guys” who hate bitches, sluts, and whores, and feel like they’ve been cheated out of female attention thanks to alpha male douchebags getting all the girls. Sound familiar?

Over the next few days, there will be a great deal of debate, both online and in the mainstream media, about whether Rodger was influenced by pick-up artists and men’s rights groups, or whether he was just another example of the archetypal troubled young man.

MRAs will continue to point out that the men’s rights movement does not advocate violence against women. Others will point out the many instances where MRAs have harassed or attacked women. In this battle between opposing armies of armchair psychologists, no useful conclusions will ever be made.

Instead, what we should be doing is looking at the many young men who might well agree with Rodger’s opinions on women. They may not think of themselves as being like him, but they share the same rage and sense of entitlement; “Incels,” men who feel cheated by the inadequacy of pick-up artist tactics, teenage boys who buy into the “friendzone” myth, “nice guys” who despise the women who reject them. Elliot Rodger belonged to all of these groups. And if they sympathize with Rodger’s desire for revenge against women, then they need help. Not the nonspecific mental “help” that people often namecheck when speaking about mass murderers “getting the help they need,” but help to understand that they are not entitled to attention from the opposite sex.

Most of the reactions to Rodger’s YouTube diatribes boil down to “Why didn’t anyone notice that this guy was dangerous?” Well, it’s probably because we’re increasingly used to his violently misogynistic beliefs.

If the police investigated every “nice guy” who complained about involuntary celibacy or posted a video rant about how women are all bitches, then the prison system would be even more over-stretched than it already is.