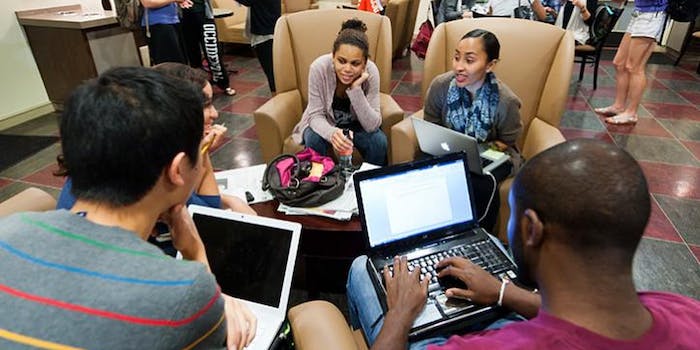 A group of men's rights activists decided to troll a college site for reporting sexual misconduct.

Men’s rights activists can’t prove most reported rapes are fake, so now they’re making the rape reports up themselves.

That seems to be the logic behind the trolling that 4chan and Reddit’s notorious men’s rights communities undertook on Tuesday when they discovered the existence of an online form set up to collect allegations of sexual misconduct at Occidental College in Los Angeles.

The 4chan and Reddit trolls spammed the college with hundreds of fake anonymous reports.

The Sexual Violence Anonymous Reporting Form allows students to anonymously report any concerns regarding rape, assault, or sexual violence to campus authorities. Campus officials will then contact any person named in the form, review the campus’ Sexual Misconduct policy, and warn them about repeating potential offenses.

The form clearly establishes that just submitting it will not be the basis for a thorough investigation, and that anyone who wishes to file an official complaint with the school must go through the college’s regular grievance process. But men’s rights advocates (MRAs) on 4chan and Reddit evidently thought that it did. The redditor who posted the form’s existence to Reddit’s MensRights forum Tuesday, ShitLordDon, described it as though filling out the form itself was enough to lead to rape charges:

Feminists at Occidental College created an online form to anonymously report rape/sexual assault. You just fill out a form and the person is called into the office on a rape charge. The “victim” never has to prove anything or reveal their identity.

Currently, the most upvoted comment on the Reddit thread is from an exasperated MRA participant pointing out that the thread’s title is misleading and that the rest of the commenters are getting worked up over nothing. In fact, the MRAs got so worked up that on both Reddit and 4chan, they made plans to spam the form with false rape charges.

Journalist David Futrelle, who also runs MRA watch blog Manboobz, collected evidence of the plans to spam the college on Reddit before moderators stepped in and deleted most of them.

“I’m actually sorely tempted to throw together a script to bombard it with thousands of spurious, nonsensical complaints,” wrote redditor MattBD in a now-deleted comment.

“Better yet,” responded redditor Todda468 in a comment that still remains, “get some lists of names from the university so even by sifting through piles of gibberish they still can’t determine ‘real’ from fake.”

Occidental College’s “Sexual Respect at Oxy” page reveals that the form is just one of many sweeping changes the college has made recently in response to acknowledging it hasn’t done enough to combat sexual assault on campus. Among them are a 24-hour sexual assault hotline and the position of Survivor Advocate.

They may want to consider adding a section about online harassment.