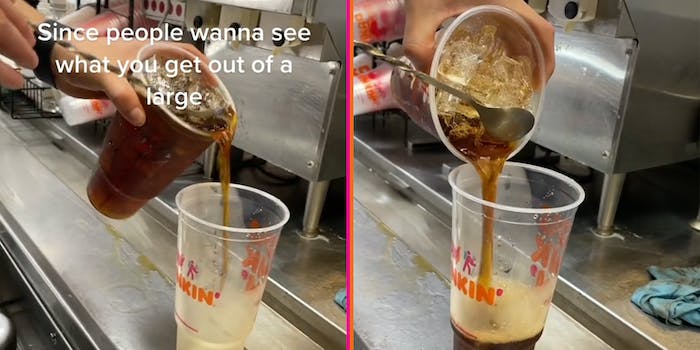 ‘That’s why I always ask for NO ICE’: Dunkin’ worker reveals how much iced coffee actually comes in a large cup in viral TikTok

The TikToker revealed 'what you get out of a large,' and some viewers feel scammed.

A viral video on TikTok is revealing that if you get light ice or no ice with your iced coffee at Dunkin’, you are apparently getting a whole lot more caffeine in your system.

The video comes courtesy of @jasonmora2, a TikToker who documents various aspects of working at Dunkin’ and occasionally engages questions about Dunkin’ life from other TikTokers.

The video, captioned, “Since people wanna see what you get out of a large,” shows the TikToker pouring an iced coffee into another cup, revealing pretty much a 1:1 ratio. It’s unclear if this is how much ice all Dunkin’ locations use in their iced coffees, however. The Daily Dot has reached out to Dunkin’.

Incidentally, that video’s attracted 6.8 million views since going up on the platform just a day ago.

A number of commenters responded to the video by revealing themselves to be Team Light Ice, advocating for an ordering option they perceived to be more of a savvy consumer choice.

“That’s why I always ask for NO ICE,” one even said.

The TikToker obliged, doing a comparative pour with a “light ice” version of the drink, and it’s nearly all coffee.

Others, however, marveled at how much more coffee was provided with light ice, with the person whose question prompted the light ice video jumping back to say, “Oh, that’s why I feel so shaky after downing one in five minutes.”