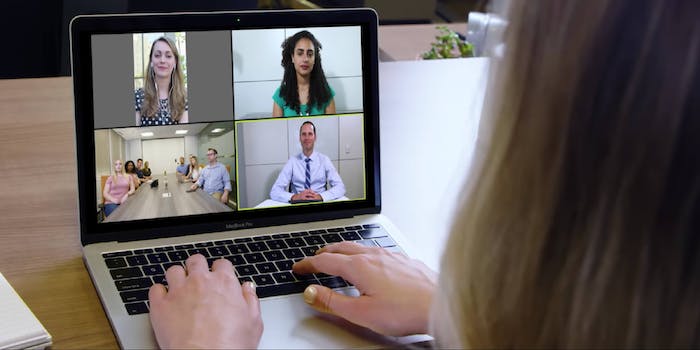 Women of color are sharing their stories.

Racist trolls are taking advantage of the coronavirus crisis by hijacking Zoom meetings and specifically targeting Black people and women.

Zoom has seen an uptick in usage, as it’s one of the only means of work and school communication due to the self-quarantining and social distancing.

A day after trolls hijacked a Black student meeting at the University of Texas and hurled racist slurs, Badia Ahad, an associate professor in Chicago, Illinois, shared via Twitter that trolls hijacked her Zoom lecture and spouted the N-word.

Her tweet went viral, garnering thousands of responses from some expressing sympathy and some sharing their own experiences.

Shaheen Pasha, an assistant teaching professor in Pennsylvania shared a similar experience that happened during her virtual informational session on Tuesday evening.

As soon as the call began, she says trolls snuck in, along with actual students. She failed to mute and remove them. The trolls ended up attacking both Pasha and her Black colleague.

“My colleague who is Black was trying to help and then they started shouting racial slurs at him,” she told the Daily Dot via email. “They were also using slurs against me for being Pakistani and Muslim and a woman.”

They even threatened to rape her.

Shaina V. Destine, a professor in Knoxville, Tennessee, says when she began sharing her screen with her students, a participant blasted an expletive-laced rap song by Chief Keef.

In Ahad’s Twitter thread, the majority of people sharing their own experiences are Black women, and only one is not a woman of color.

“I’m in [an] online community with other academics of color and so many of them are having this same thing happening,” Destine told the Daily Dot. “I haven’t heard of any of my white counterparts being subjected to this.”

Even though racist “zoombombings” are being widely reported now, as there has been a surge in usage, this is not a new problem.

Mrs. P, a teacher in Louisiana, who has requested anonymity, told the Daily Dot she experienced a racist attack by her own students in August of 2019.

Pasha, who, as a journalist, has been targeted by trolls in the past, says this had a different impact on her.

“This felt different as I could hear them and in some cases see them,” she said. “That felt like a whole other level of violation.”

Some of the trolls, she said, may have been as young as her 12-year-old son. She broke down afterward.

Mrs. P also went through a similar cycle of questions and doubts.

“Was it the sight of my black face which he had seen three days in a row completely revolt him to the point where he had to call me a n*****? Even though I was his teacher and he was my student? ” she recalled. “Did he feel that he could not, would not learn from me?”

Zoom was quick to respond to Ahad and others’ tweets. It shared a link to its website with suggestions on how to avoid “party-crashers.” Yet, many feel that terming the racist trolls “party-crashers” negates the impact of their hateful messages.

“Party crashing indicates, though uninvited, the presence of these users attendance was felt temporarily,” says Mrs. P. “These vicious users not only denigrate the speaker but allow a visceral reaction to be shared by all – no matter which race.”

“If it was just random ‘party crashers’, the messages wouldn’t be racially charged messages and targeting specifically people of color.  Mine were rap lyrics with the N-word capitalized repeated,” she said.

On Monday, the FBI issued a warning that it was receiving reports of such incidents across the country and urged users to maintain “due diligence and caution” as they engaged in meetings.

Dr. Dennis Johnson, who shared their experience of being called the N-word during their dissertation defending, started a petition urging Zoom to protect its users.

“I’m a Black, first-generation college graduate from the Southside of Chicago, who worked diligently to get to March 26th – the day I would finally get to defend my dissertation,” Johnson wrote in the petition.“Truth be told, no matter how much I brushed it off, my moment had been taken and there was nothing I could do about to get it back.”

The petition letter has been signed by nearly 30,000 people.

The Daily Dot has reached out to Zoom.