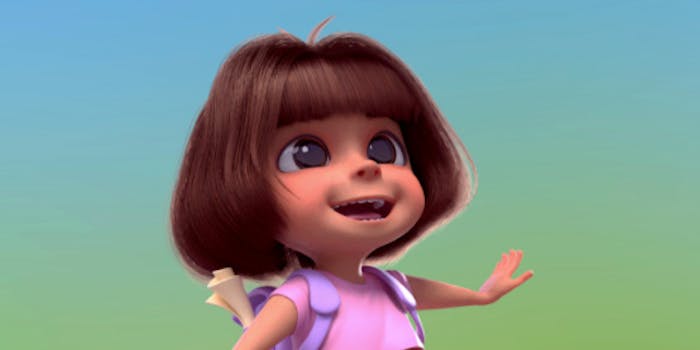 The animated series Dora the Explorer trended on Twitter on Monday, as fan art from three years ago circulated online, with some thinking that the beloved children’s character was getting ready for a scary new reboot.

No, Dora’s not getting an ill-advised redesign akin to the Sonic the Hedgehog live-action makeover that horrified fans in 2019. For a few tenuous moments, though, some fans of the bilingual cartoon character had to scroll through tweeted images of Bizarro Dora to discover what was really happening.

One fan tweeted the rendering with the observation, “That doesn’t look child friendly,” adding, “I’m scared, what did they do to you, Dora” with some crying emojis.

Another observed, more bluntly, “What the fuck did they do to my gal Dora and why” — providing a side-by-side comparison of the two.

Another imagined a Hunter S. Thompson-styled adventure for Dora, remarking, “Dora looks like she’s just done about 10 lines with Boots and the Map,” said @zahrah_m19. “She’s on another plane of existence.”

Yet another person took the image one demonic step further, tweeting, “This is how the new Dora looks to me,” adding yellow reptilian eyes and weaponry.”

And one person scanned the entirety of “new Dora” to reveal another issue, focusing in on her pants and asking, “Now why they got my girl Dora’s pantyline showing?”

It turns out, however, that this is not an official Dora. Rather, as Cartoon Crave tweeted, “‘Dora’ is currently trending on Twitter due to people mistaking fan artwork for a new version of the series.”

It then linked to an Artstation page from Dimas Vian, dating back to 2018. The artist, according to his page and linked social media pages, is based in Bandung, Indonesia, and has most recently been active showing off 3D animations on Instagram.

Some responses to that post chided people from not checking sources, with one Twitter user, @mationmiss (who goes by “Anny Mation”), tutting, “Its 2021 and people still don’t check their sources.”

Another observed, “Saw Dora was trending and thought ‘Huh that weird’ and proceed to see what is clearly fan art that mfs think is real because that’s how Twitter works.”

But it provided fun for some willing to play along, including one who posted a screengrab of Dora’s nemesis, Swiper, with the caption, “That Dora looks like she gonna get us lost.”

Update: The artist returned our request for an interview on Tuesday morning (Tuesday evening his time), unaware he was trending until we told him. Currently working at an Indonesian gaming studio, he said his 3D Dora was essentially an exercise he did as he was developing his animation skills.

“OMG, why now?” he wrote to us, upon learning of his artwork’s newfound attention on Twitter. “Why not three years ago? LOL.”

While not a Dora fan in particular, he said he is a fan of animation, and was drawn to render Dora as a 3D character. While satisfied with his execution, he also acknowledges that his skills have come along in the time since he created this Dora.

“Every artist knows that feeling,” he wrote. “When you see your old work, you’ll say, ‘What on Earth is it?'”

Asked if he’d consider doing an updated Dora, to show a newly-engaged world how far he’s come, he noted, “I’m not thinking about that. I’m working on other work.”