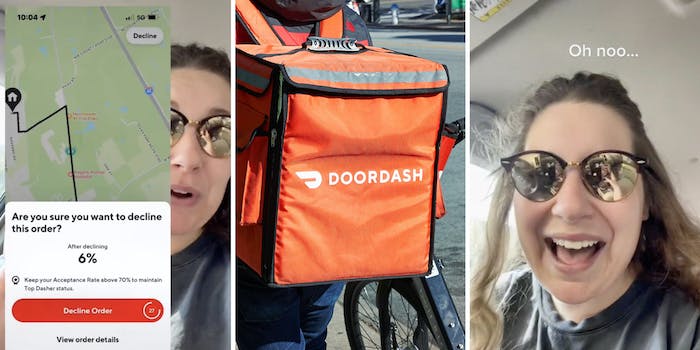 In a viral TikTok video, a DoorDash delivery driver calls for a higher base pay and claims that the company threatens “Top Dasher” status to get drivers to accept orders with minimum base pay and low tips.

“So instead of DoorDash just raising the base pay on each order, they decided to threaten our Top Dasher status,” user @swizzlebalarkey says, before laughing. “Oh my gosh, just raise the base pay.”

The TikToker shows a screenshot of the Dasher app asking for confirmation that she wants to decline an order. The message claims that after declining, the creator’s acceptance rate would be 6%. It also notes that dashers must keep their order acceptance rate above 70% to be considered a Top Dasher.

According to the company’s website, Top Dashers must have a customer rating of 4.7 or higher and a completion rate of at least 95%, in addition to the 70% acceptance rate. They also must have 100 completed deliveries in the previous month and at least 200 deliveries completed overall. Top Dasher status allows dashers to complete deliveries at any location at any time, so they don’t have to abide by a schedule.

In the caption, the TikToker claims that she was never a Top Dasher. “Oh no my TD status is ruined. Jk never been a TD,” she wrote.

The creator argues in the video that DoorDash is using the threat of losing Top Dasher status to get drivers to accept more orders that offer low tips and the minimum base pay of $2 per order. DoorDash currently offers a base pay ranging from $2 to $10, depending on the time, distance, and desirability of the order, according to its website.

The dasher’s video received over 900,000 views and sparked debate.

A few users argued that DoorDash is intended to be a side hustle, so she shouldn’t complain about the base pay. “Get a real job,” one user said.

The creator addressed these comments in a follow-up video, in which she notes that DoorDash isn’t her full-time job.

“Everyone saying get a Real job definitely uses door dash,” one user commented.

However, several other alleged DoorDash drivers shared similar experiences in the comments. They claim that Top Dasher status isn’t worth accepting orders for low pay.

“Guess I’ll never be a top dasher because I refuse to accept anything that isn’t paying me a minimum of $1 per mile,” one user said.

“Top dasher status can suck it. I’ve got 5 (star) service and that’s the only thing I give a crud about. My acceptance rate is 12%,” a third user argued.

The Daily Dot reached out to user @swizzlebalarkey via TikTok comment.

Update 10:18am CT, May 10: A DoorDash representative told the Daily Dot that Dashers on average make $25 per hour and work less than four hours per week.

“We’re always eager to hear from Dashers, customers, and merchants around the country as we work to create the best possible experience for all,” they said via email.

They said that Dashers receive a guaranteed minimum amount that they will make before accepting an order, in addition to details like the location, restaurant name, and estimated total mileage.

“We want Dashers to have as much information as possible to decide if they want to accept an order. Dashers are always free to decline any order,” they said.