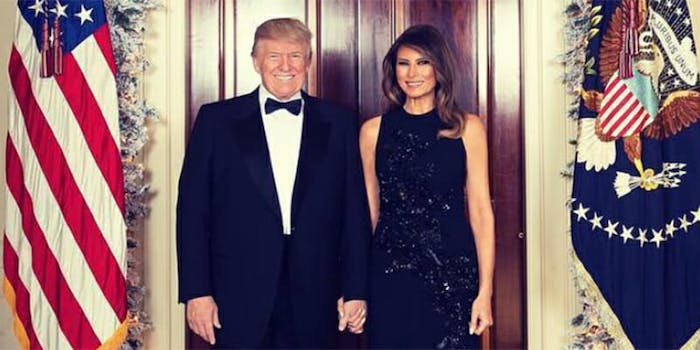 Neither mentioned their 13 years of marriage.

Former President Barack Obama set the bar for how presidents living in the digital age should interact online. However, when it comes to being presidential, Donald Trump has erred on the sign of throwing convention to the wind.

Still, doesn’t seem like too much to expect that Trump would remember to wish his wife a happy anniversary amid his tangled web of tweets about Democratic obstruction or Republican tax cuts. But alas, no mention of Melania Trump or the couple’s 13 years together could be found on the president’s timeline for their anniversary Monday.

Just last week, Obama displayed some #RelationshipGoals for everyone by sharing a photo of him and Michelle for her 54th birthday.

“You’re not only my wife and the mother of my children, you’re my best friend,” he wrote in an Instagram post. “I love your strength, your grace, and your determination. And I love you more each day. Happy Birthday, @MichelleObama.”

You're not only my wife and the mother of my children, you're my best friend. I love your strength, your grace, and your determination. And I love you more each day. Happy Birthday, @MichelleObama

Not only did Melania and Donald Trump forgo mentioning their anniversary online, according to the Washington Post—they also didn’t go out to eat or celebrate.