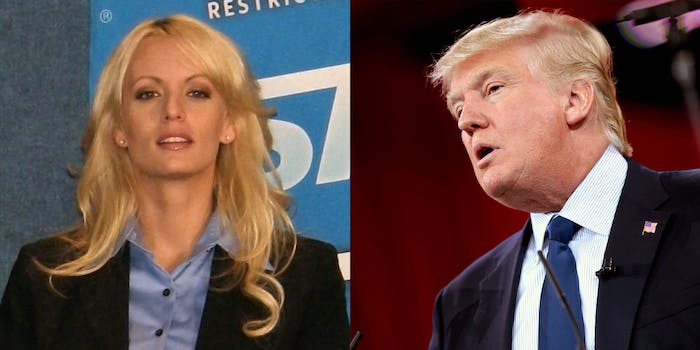 Trump's representatives skirted around the reports.

Michael Cohen, who recently announced he was suing BuzzFeed for publication of the Fusion GPS dossier, allegedly paid adult performer Stephanie Clifford in October 2016, according to the Wall Street Journal.

Clifford, who went by the name Stormy Daniels, “privately” said that a sexual encounter occurred with the president in 2006 at a golf tournament, a year after he married First Lady Melania Trump.

When reached by the Wall Street Journal, a White House official, speaking about the allegations of an affair, said that “these are old, recycled reports, which were published and strongly denied prior to the election.” The official did not comment on reports of a settlement being paid out.

Cohen, who reportedly arranged the payment, denied the affair took place, but, according to the Wall Street Journal, also did not speak to the news of a payment.

“President Trump once again vehemently denies any such occurrence as has Ms. Daniels. This is now the second time that [the Wall Street Journal is] raising outlandish allegations against my client. You have attempted to perpetuate this false narrative for over a year; a narrative that has been consistently denied by all parties since at least 2011.”

After the agreement, Ms. Clifford’s camp complained the payment wasn’t being made quickly enough and threatened to cancel the deal, some of the people familiar with the matter said.

The payment was made to Ms. Clifford through her lawyer in the matter, Keith Davidson, with funds sent to Mr. Davidson’s client-trust account at City National Bank in Los Angeles, according to the people.

Also in 2016, another adult film star said the Trump kissed her against her will at the same 2006 golf event.