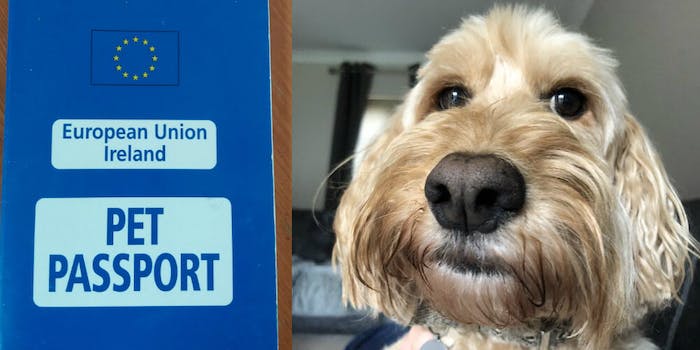 #DogsAgainstBrexit highlights the negative impact of Brexit on pets

Some heroes wear capes, others have fur.

Brits against Brexit have expressed the negative impact Brexit will have on people, foreign relations and policy, and the environment, among other things. But a new face to join the Brexit resistance is dogs.

The hashtag #DogsAgainstBrexit highlights the negative impact Brexit will have on all our furry friends.

Dilyn The Downing Street Dog kicked off the hashtag on Twitter.

“Hello my name is Dilyn… Brexit will see the end of the pet passport. To travel to the EU your pet will have to have a blood test three months before travel. I am dog against Brexit. Send me photos of your own #DogsagainstBrexit,” the Twitter account for Dilyn wrote.

Hello my name is Dilyn… Brexit will see the end of the pet passport. To travel to the EU your pet will have to have a blood test three months before travel. I am dog against Brexit. Send me photos of your own #DogsagainstBrexit pic.twitter.com/0GSdoaOWiM

Other British pet owners began chiming in with their own canine photos and statements of resistance.

“I am Fido. I will be very happy to do a massive shit on Article 50 and therefore make it completely invalid. #DogsagainstBrexit,” Fido’s owner wrote.

Many good boys and girls appear concerned about where their favorite dog food is going to come from after the prospective food shortages happen.

Hello. I’m Maggie. If a no-deal Brexit causes shortages to my favourite dog food, then all those responsible for it will have to answer to me.#DogsagainstBrexit pic.twitter.com/NCbLlQ6CgR

Other concerns include not being able to travel with their families around the EU. The EU pet passport allows dogs to do just that, but if a no-deal Brexit goes through, the passport will no longer be valid for British pets.

“My name is Dolly and if I dont get my lamb dinner and the ability to go to France with my Mum and Dad I will bite someone’s ankles! #DogsagainstBrexit,” Dolly’s owner wrote.

#DogsagainstBrexit what happens to our passports. We love going to France? pic.twitter.com/tROgVoPpGI

Hello! I’m Jessie Bear and I owe my life to the EU pet passport that allowed me to travel across Europe to safety in the UK. #DogsagainstBrexit pic.twitter.com/4gJJCCRtFo

Jupi is worried about their mummy, a Romanian doctor living in the U.K. who is facing having to go back to Romania. “Please don’t send her home,” Jupi pleaded.

My name is Jupi. My mummy is a Romanian doctor who works hard for the NHS. Please don't send her home. #DogsagainstBrexit pic.twitter.com/RVz9NzTlZ9

Concerns about the medication shortages the U.K. is facing aren’t just exclusive to humans. Hubble the Chihuahua would have lost his eyeball without antibiotics, the supply chains for which are likely to be disrupted by Brexit.

Hi, I’m Hubble the chihuahua. Not long ago I nearly lost my eye because of an attack by a horrible (probably racist) cat. I worry that the medicines that helped me keep my eye won’t be available to other dogs like me in the future. #DogsagainstBrexit pic.twitter.com/D2WHStGPvY

The deadline for the U.K. to leave Brexit is Oct. 31, which British Prime Minister Boris Johnson says will happen–with or without a deal.