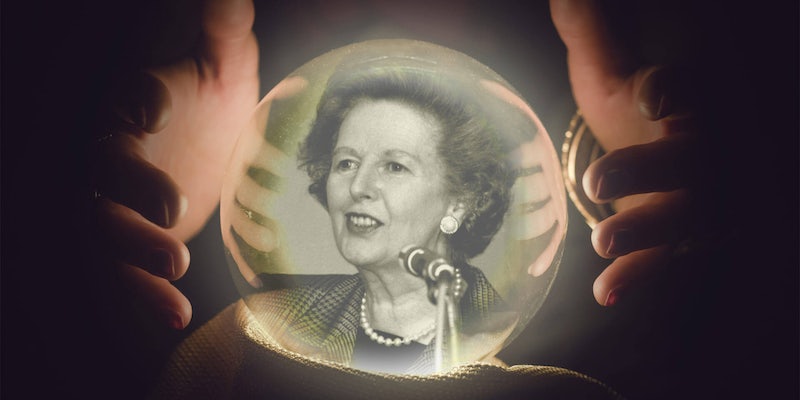 The ghost of Margaret Thatcher summoned to solve Brexit

Happy Science says the spirit of Thatcher gave a prediction about Brexit in 2013.

Despite the deadline looming ever closer, we still don’t have any kind of solution for Brexit. With the country equal parts anxious and exhausted, it seems we’re willing to try anything. Even a seance to summon the spirit of former prime minister Margaret Thatcher to ask her opinion on the matter.

This should solve everything pic.twitter.com/eiOmz1xIpu

A Japanese religious organization known as Happy Science is the group behind it. Branded a cult by many, their beliefs include the existence of numerous alien beings—including Wookies and Na’vi, albeit under other names—and that their leader is the current incarnation of Buddha, Jesus, and several other historic spiritual leaders. They’re also a right-wing political party in Japan whose policies are pro-immigration (in the name of population increase), pro-nuclear deterrent and wildly anti-Chinese, and anti-Korean. One of their leaders’ many talents includes the channeling of the spirits of the departed (and for some reason, Barack Obama even though he’s still alive) which is where Margaret Thatcher and Brexit comes in.

Despite the fact that Brexit wasn’t even on the cards back then, the seance in question actually took place in 2013 on the day after her death. It’s only now with Brexit looming that they’re screening the full recording in London on both the 13th and 19th of September. By following the QR code on the fliers (or just clicking play on the link below) you can see a selection of clips from the seance where Thatcher apparently blames Germany and France for the failings of the EU, encourages Japan to attack China and shouts for Denis, not quite realizing that she’s dead.

fuck me, happy science are holding a margaret thatcher seance

if everyone who attends this is haunted by the angry ghost of margaret thatcher, they deserve it

Though as Twitter user @einkuhnergott points out, there have certainly been worse suggestions for solving the problem of Brexit.

You think it was a coincidence Brexit day was scheduled for Halloween?

But it seems that the spirit of Thatcher isn’t the only psychic among us, because several people, including satire site The Waterford Whispers, actually predicted something very much like this long before the announcement by Happy Science.

BBC DP Wall to wall right wingers, including Boris Johnson's Dad. I was expecting a seance to get Thatcher and Churchill back! FFS!

I'm surprised they haven't held a seance, and invoked the spirits of Churchill and Thatcher for guidance.