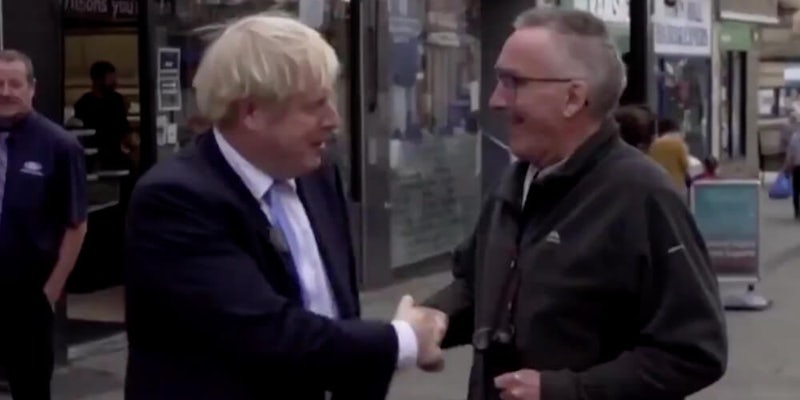 'What a quintessentially British and polite way to basically tell the Prime Minister to f*ck off.'

British Prime Minister Boris Johnson–primarily thanks to his unwavering approach to Brexit–is leading one of the most unpopular governments that Britain has seen in a whopping 40 years.

His steadfast refusal to extend the Brexit deadline–the date the U.K. is set to leave the European Union–in order to negotiate a deal for that exit has fractured the Tory party. Even  Johnson’s own brother quit as a Tory member of parliament (MP) and minister, citing “unresolvable tension” in his role, per the BBC.

On Thursday, Johnson said on record that he would “rather be dead in a ditch” than extend the Brexit deadline. But that wasn’t all that was caught on record. While shaking hands with British citizens in the streets of Leeds, Johnson was politely told to “please leave my town”–a phrase that has transcended into an anti-Boris Johnson rallying cry.

It’s apparently British for f*ck off, according to Twitter user @SnazzyAzzy

What a quintessentially British and polite way to basically tell the Prime Minister to fuck off. #PleaseLeaveMyTown https://t.co/m8gEVq552a

“Maybe this could become a ‘thing’ #PleaseLeaveMyTown. Echoing around the country wherever #LiarJohnson tips up,” Twitter user @AJD_1971 wrote.

Looking forward to Mancunians adopting this for the forthcoming Conservative Party conference!! #PleaseLeaveMyTown

Folks remember this when this con man comes to town#PleaseLeaveMyTown https://t.co/4fT0cMCFzv

In response to the man, who is being hailed as a hero, Johnson said, “I will, very soon.”

“Folks remember this when this con man comes to town#PleaseLeaveMyTown,” Twitter user @judahnaveen wrote. Another dubbed the phrase the “hashtag we’ve been waiting for.”

Brits are using the hashtag to revel in the mockery that is Britain’s worst prime minister to date, as one user declared. “I love the polite ‘Please leave my town’ man. Have any DJs sampled it yet?” another quipped.

He can't speak, he can't think, he can't distinguish bullshit from reality, he can't lead.

He can't be allowed to destroy Britain

He's a liar and a loser

He abuses his Office of State

I love the polite "Please leave my town" man. Have any DJs sampled it yet?

My favourite bit is the dismissive ‘off you fuck’ pat on the back at the end. A work of art. #PleaseLeaveMyTown https://t.co/C0wdg04b4C

Although, come to think about it, they'd probably rather have said:

The “Please leave my town” guy, who even gave Johnson a friendly farewell pat on the back, is basically Britain’s equivalent to America’s “Green Shirt Guy.”