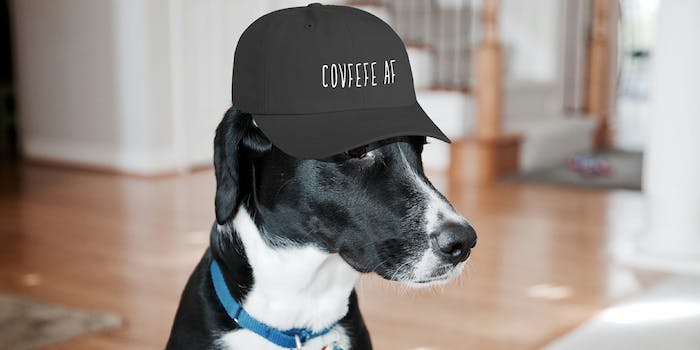 The left barks back at @dog_rates after account apologizes for Planned Parenthood donations.

In this hyper-partisan and furiously political environment, it’s often wondered whether it’s ever possible for both sides to agree on anything.

Amazingly, the answer is yes. Everyone hates @dog_rates now.

What once was a beloved Twitter account that delighted the internet by giving dogs anthropomorphic but also generally doggish qualities (“It likes good sits!”), and mathematically impossible ratings (“15/10 would make a number up out of thin air again”), is now on the receiving end of animus from both the left and right.

It all started with nothing to do with the any of this, which is to say it all started with President Donald Trump, when he seized the national dialogue by making a typo via Twitter: “covfefe,” you may have heard of it. Many people loved the inanity of the tweet, especial dog_rates:

This is Dewey (pronounced "covfefe"). He's having a good walk. Arguably the best walk. 13/10 would snug softly pic.twitter.com/HciEaJkC4D

But dog_rates proprietor Matt Nelson—who in his defense was correct that this would cannibalize the national conversation and who has a thriving merchandise shop—saw an opening. He made a hat that read “Covfefe AF.”

Look at that hat. It’s got a “low-profile, classic, cut-washed cotton chino twill cap” and an “adjustable self strap with hide-away side buckle.” Who could hate that hat? Nelson even decided to donate all the money it made to Planned Parenthood.

PUPDATE: half of all profits will be donated to @PPact

Now, how donations related to purchases work is not something the internet has a complete grasp on. Because, if you don’t like the organization designated but like dogs—many people dislike Planned Parenthood and but also like dogs—you don’t have to purchase the product, and money doesn’t go to the organization, and dogs continue to dog about unaffected.

For people who do like the organization (and thus are already inclined to use their money to support it), and also like dogs, they can purchase the hat, and money that they were already slightly inclined to send that way goes that way, while a hat comes their way. And dogs keep doing dog things.

(And yes, this explanation is leaving out the people who wanted the hat but did not want their money to go to Planned Parenthood and are thus conflicted.)

It's your biz, but this is a terrible business decision imo

They wondered why he wouldn’t donate to the DOGS?

I conceded that from get-go. He's got every right to do it. But it's a bad business decision. Not like there aren't worthy dog causes

(The answer to that, and I can’t believe I have to physically type this out, is that dogs are relatively unaffected by the Trump presidency.)

You may want to rethink this. Just a suggestion.

Anway, Nelson, who we should remind everyone right now is 20 years old and runs an account that shares pictures of dogs and gives them number grades that have no basis in reality, felt the need to apologize.

You don’t need to read that whole statement. He jokes that dogs are bipartisan and that his account is not about upsetting people, so he’s sorry for selecting Planned Parenthood as a charity.

Now the left is upset that he caved to the right.

Due to the intense backlash from some diseased National Review chud Dog Rates will make a matching donation to a conversion therapy camp.

Their arguments are that the people on the right who are upset about the “covfefe/dog rates/covfefe hat/Planned Parenthood” saga are not really upset, and are attacking a dog Twitter account for no reason other than that they hate a charity, and that because of their stances toward women’s rights, dog_rates had no responsibility to apologize to them.

And was bad for doing so.

uh catering to followers who hate women (& who think dogs are also more worthy of money than women) isn't the best look for you either dude.

This is cowardly, Dog Rates Guy. I thought you were cool.

How could dog_rates allow himself to be manipulated like this?

(Which, again, reminder, Nelson is a 20-year-old who is still in college and who runs a social media account that posts pictures of dogs and gives them grades that he makes up on the spot.)

Nelson did not respond to a request for comment.

I guess even dogs have become divisive in the Trump era.

Here’s a video of a chicken pecking at a keyboard.