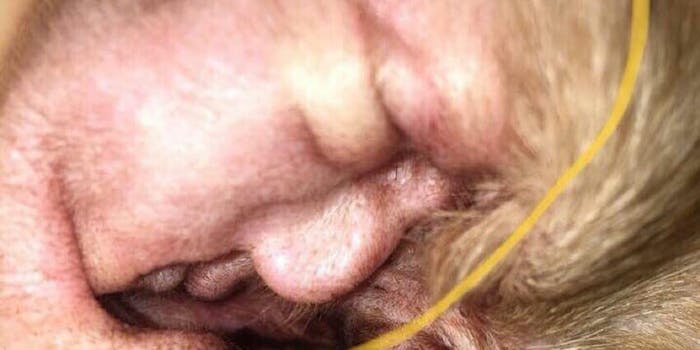 The coif, the squint, the puckered lips—it’s all there.

President Donald Trump has been said to look like a lot of things. This time, it’s a dog’s ear cyst that looks exactly like Trump’s side profile.

The blond coif, the squint, the puckered lips—it’s all there.

The Trumpish cyst belongs to a 2-year-old beagle named Chief, who in turn belongs to 25-year-old Jade Robinson of Jarrow, England.

Robinson said she snapped the photo to send to the vet while her pup was sleeping. It was a friend who pointed out the likeness to Trump.

“This photo had to be taken whilst Chief was asleep as he does not like his inner ears to be touched,” Robinson told BBC. “And I swear I looked and zoomed in and out at this photo over 20 times and never saw Donald Trump—it was my eagle-eyed friend who pointed it out.”

Robinson told BBC she’s now trying to raise money to have Chief sedated so the vet can get a good look at the cyst. She said the infection appeared despite thorough cleaning.

“If you know anything about beagles you know how intelligent, active and curious they are and Chief certainly lives up to that—he’s full of mischief,” Robinson said. “As he has the very distinctive long ears they spend a lot of time scraping the ground sniffing for lovely smells, unfortunately this leads to his ears picking up a lot of dirt.”