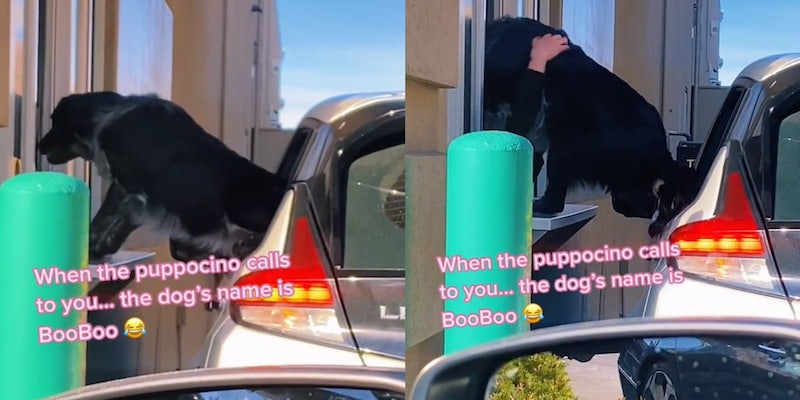 'What in the health violation?'

Viral footage of a very eager dog at Starbucks is inspiring jokes and criticism from viewers.

The footage was posted to user @dollface_danapace‘s account. It is the only video she’s ever posted, and on its own has gathered more than 5 million views in only three days.

The video is shot from the driver’s seat of a car in line at a Starbucks drive-thru. The car ahead is stopped outside the delivery window, and (barely) contains the video’s star: a very excited black dog.

For the uninformed, Starbucks locations sometimes offer a “puppuccino” when employees spot a customer with a dog in tow. Don’t worry, it isn’t actually coffee, its just a small cup of whipped cream that dogs go absolutely bonkers for. In the video posted to @dollface_danapace’s page, the dog in question was clearly done waiting for his special Starbucks treat.

Even as the video starts, the dog is already more than halfway out the car window, with his front paws on the Starbucks delivery window. He is in the midst of struggling completely out of the car, apparently set on living the rest of his days with the nice Starbucks staff that gives him whipped treats.

As he continues to fumble and try to get his footing, arms can be seen emerging from the Starbucks window to embrace the dog. The employee can barely be seen, apart from glimpses of blonde hair, as she wraps her arms around the eager pupper and helps him to step entirely into the window and out of the car. Delighted giggles can be heard from nearly everywhere, including the interior of both cars and the Starbucks location.

The impatient dog’s name was revealed via text overlay, which sets the scene as “when the puppocino calls to you” and identifies the dog as “BooBoo.”

Commenters were largely delighted by the video, and flooded the comments section with jokes and charmed takeaways. BooBoo was officially dubbed “a good boy… not the best boy, but a good boy” by commenters, many of whom couldn’t get over the employee’s eager reaction to the dog’s attempted escape.

“The employee really said ‘you’re coming home with me,'” one person wrote. “They EMBRACED him,” another pointed out.

Numerous people put words to the dog’s amusing antics, captioning the video with phrases like “Do you guys have any more boops left,” and “y’all hiring? I’ll work for free puppaccinos!”

The jokes came flooding in, as viewers absolutely melted for BooBoo and his urgency to reach the Starbucks kitchen. “She just traded her dog for some coffee,” one person joked. Another account declared that BooBoo “belongs to Starbucks now.”

“That dog is just trying to reach you about your car’s extended warranty.”

A few people were pointedly less amused by the video and criticized everyone involved via comments section.

“This is absolutely not okay,” one person wrote. Another critiqued the owners and employees in a slightly less direct way, simply writing: “what in the health violation?”

Other critical commenters pointed out that the dog could have hurt itself, and noted that some people are allergic to dogs. They claimed that BooBoo’s presence behind the counter could cause issues for those with allergies and called the Starbucks staff out for allowing the dog to climb onto the sill. They noted that the location could be dinged for a health code violation and complained about potential fur in their nonexistent drinks.

Most people were far less pressed, however, and simply took a moment to enjoy the simple pleasure seeping from the video. Everyone involved is clearly delighted by BooBoo’s gall, and numerous people were likely correct when they pointed out that “the drive-thru worker is going to be so happy all day.”