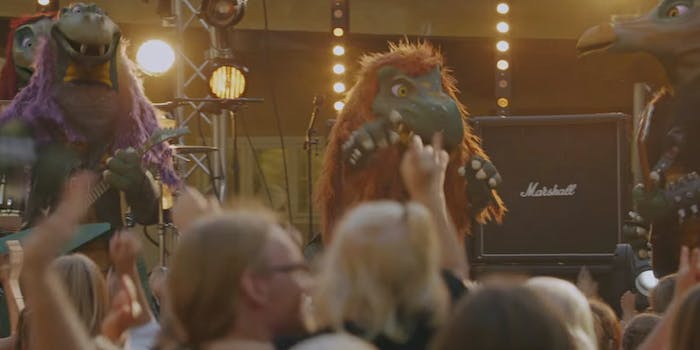 If these guys aren't in the next 'Jurassic Park' movie, there is no justice in the world.

Heavy-metal is no stranger to novelty acts. Bands like Hatebeak and Caninus have been around for years, and 2010 saw the rise of Babymetal, an insanely popular Japanese pop-metal band fronted by three teenage girls. Photo by Fuguito via Wikipedia

But this band from Finland might outdo them all. (Well, not Hatebeak; Hatebeak is insane.) They’re called Hevisaurus, and they finally filled the void of bands who play metal but look like they should be performing at a pizza parlor/arcade.

Komppi Momppi, Riffi Raffi, Milli Pilli, Muffi Puffi, and Herra Hevisaurus are five Finnish dinosaurs who play metal music for children and, no doubt, a growing population of adults.  But how would such a band form? Well, according to their Wikipedia page:

…five dinosaur eggs, made from metal, survived the mass extinction some 65 million years ago in the mountain of wizards. In the year 2009 witches gathered at the same place. A giant lightning bolt hit the ground and changed it to ash and revealing the eggs at the same time. From the power of the witches’ chants, the eggs exploded wide open and five Hevisaurus’ hatched.

With such an auspicious beginning it’s no surprise that the band is now signed to Sony and has a movie coming out by the end of the year.