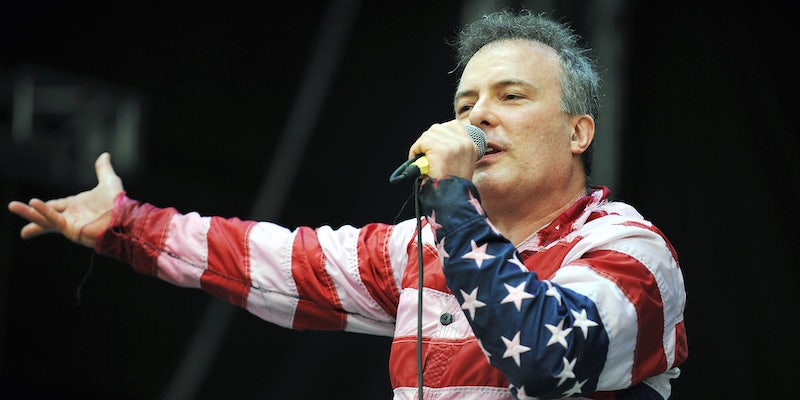 After Capitol riot, Dead Kennedys tweet support for Mitt Romney—and their singer is furious about it

One critic observed, 'This is the least punk thing possible.'

The tweet thanked Romney and another Utah-based former presidential candidate, Evan McMullin, presumably for taking stances against the Capitol rioters who disrupted Congress on Wednesday during debates over Electoral College vote certification. The tweet included a smiling photo of Romney and the observation, “Mitt cares about the USA.”

Jello Biafra, the singer, lyricist, and driving force behind the band’s overt anti-fascist politics during its initial 1978 to 1986 run, responded with an angry Facebook post that showed the tweet and then railed against it.

“As if today couldn’t get any weirder, look who posted this!!” Biafra (whose real name is Eric Boucher) began. “How dumb and clueless can you get??”

“Ea$t Bay Ray??” Biafra then asked, invoking one of the three other band members, with Klaus Flouride and D.H. Peligro being the others. Those three are continuing to use the Dead Kennedys name, sell merchandise, and tour without Biafra’s involvement.

“It sure as hell wasn’t me, and in no way represents anything DK’s ever stood for,” asserted the author of “Nazi Punks Fuck Off,” “Holiday Inn Cambodia,” “Let’s Lynch the Landlord,” “Kill the Poor,” and a number of other incendiary songs that routinely skewered political figures and institutions.

He then pleaded, “C’mon, guys, take this down – NOW. Haven’t you disgraced our inspiring legacy that means so much to people enough???”

The tweet disappointed and puzzled a number of fans, but whoever is tweeting with the band account engaged with those fans. (The account declares itself the “official Twitter account for the legendary US punk band,” but doesn’t specify if a band member or a social media representative is responsible for the content.)

When one fan (or perhaps former fan) commented, “Seeing the Dead Kennedys lib out like this hurts my soul,” the DK Twitter account responded, “If you don’t believe in humanity and science we don’t care.”

When another person made a fair point by observing, “This is the least punk thing possible,” the account responded, “Go follow someone else. We don’t need you.”

On Wednesday, the account retweeted the Utah senator’s “Romney Condemns Insurrection at U.S. Capitol” statement, and retweeted former Arizona senator Jeff Flake who, like Romney, has been criticized for being too milquetoast in his opposition to Trump.

The Daily Dot has reached out to both the Dead Kennedys’ publicist and to Biafra directly for comment.