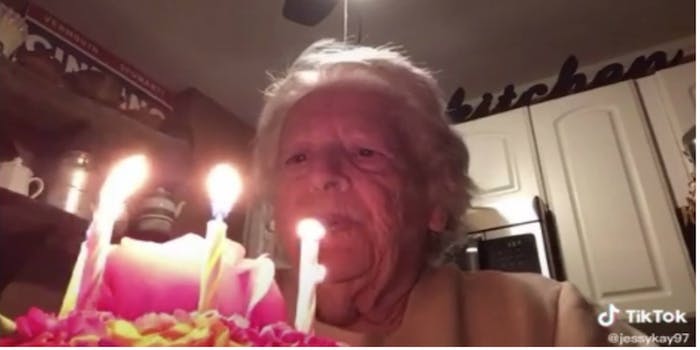 In the video, the 88-year-old serenades herself before cheering, making a 'special wish,' and blowing out her candles.

An 88-year-old quarantined grandmother has become an internet sensation after a TikTok video of her singing “Happy Birthday” to herself went viral.

People are self-quarantining to help mitigate the spread of the coronavirus. Vulnerable populations, such as senior citizens, are more susceptible to death after being infected.

The isolation and inability to see loved ones has taken it’s toll on many families.

It is no surprise that when Norma Gregorio’s granddaughter, 22-year-old Jessica Kerrington, uploaded a video of her grandmother singing the birthday song to herself, it touched the hearts of many.

In the bittersweet two-part video, Gregorio first explains that she has received a flower cake for her birthday. She shares that, even though none of her loved ones can come to celebrate with her, she has many things to remind her that it is her “special day.”

In part two, Gregorio serenades herself before cheering, making a wish, and then blowing out her candles. She ends the video by stating that she made a “special wish.”

We may never know what was Norma’s wish, but the video has since received over 8 million views.

In an interview with ABC, her grandaughter relayed her shock by the public attention.

“It was just the cutest thing, and I decided to post it,” Kerrigan stated. “I didn’t think anything would come of it.”

Gregorio on the other hand has been basking in the spotlight.

A follow-up video was uploaded captioned, “PSA from Norma after I told her she’s TikTok famous: ‘I’m not a star, I’m a galaxy!'”

In it, Gregorio thanks—in multiple languages—all of her “new TikTok friends” for making her birthday ” the most special by far.”