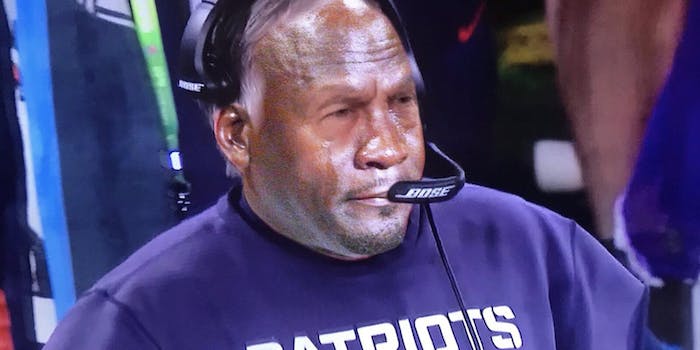 The origin and best uses of Crying Jordan, the king of crying memes

Like Michael Jordan himself with basketball, it's possibly the greatest crying meme of them all.

With the arrival of ESPN’s much-anticipated documentary The Last Dance on Sunday, all things Michael Jordan have come out of social media’s collective vault. But one of these “events” is one he’d rather have die: the invention of the hilarious Crying Jordan meme. Like Michael Jordan himself with basketball, it’s possibly the greatest crying meme of them all.

The meme has become ubiquitous enough for Jordan himself to call it out, specifically during his speech at the celebration of life for Kobe Bryant in February.

The photo of Jordan crying—taken by Stephan Savoia of the Associated Press—comes from his infamous 2009 Basketball Hall of Fame induction speech, where he was unusually candid and petty to the nth degree. (He flew out the player who made the Wilmington, North Carolina, varsity high school team over him when “his Airness” was a sophomore to prove a point.)

According to Henry Bushell’s oral history for Yahoo Sports, College of Charleston professor Ryan Milner traced the crying meme’s first iteration back to 2012 as an image macro. From there, it picked up steam on a sports and pop culture website called Boxden. (There’s also a short documentary on the meme.)

However, for whatever reason during spring 2015, meme creators on Twitter and elsewhere determined Michael Jordan’s tear-stained face to be funny enough to put on everything in sight, leading to Crying Jordan galore.

With parts three and four of The Last Dance on the way, here are 12 of the best uses of the Crying Jordan meme.

After Villanova’s incredible buzzer-beating win over North Carolina in the 2016 NCAA national championship game, everyone could see what was coming from a country mile away.

Not long after the Tar Heels’ loss, crying Michael Jordan found new life on a young face: Stephen Curry’s daughter, Riley. Following the Golden State Warriors’ incredible upset loss to LeBron James and the Cleveland Cavaliers, the reigning MVP had to deal with the press. He probably should’ve thought twice about having her up there on his lap.

While news of Brexit, the United Kingdom’s exit from the European Union, gained steam, the pound, its currency, took—well, it took a pounding on the markets.

This Crying Jordan meme is a classic from the 2016 Masters tournament. Several players throughout history have had remarkably bad turns at the world-famous 12th hole.

This is probably the best use of them all because of the layers. When Tom Brady ended up in court in January 2016 for the “deflate-gate” foolishness, the court sketch artist drew what was already a meme-worthy face.

But slapping Crying Jordan on top of that took the meme cake.

The New York Mets installed the Home Run Apple in Citi Field in 2009 to improve fan morale. When the home team hits a dinger, the giant apple (y’know, The Big Apple, New York City, get it?) rises up and down in center field.

In 2015, the Mets were good enough to make it to the World Series but lost to the blazing-hot Kansas City Royals. So, naturally, people took some liberties with apple.

With all the deaths in HBO’s explosive Game of Thrones series, this crying meme was virtually inevitable.

Staying on the Game of Thrones tip, the so-called Ice King—the disappointing character who never ended up being the existential threat he was built up to be—got the Crying Jordan treatment as well.

God Save the Crying Queen

When England lost to Croatia in the 2018 World Cup semi-final, haters and slanderers got creative with the currency.

Belichick loses in the offseason

Although the meme is from 2018, with the news that Patriots tight end Rob Gronkowski was traded to the Tampa Bay Buccaneers, we have the feeling head coach Bill Belichick can’t be too hot about him teaming up with quarterback Tom Brady—even if Belichick’s the one responsible for the trade as de facto general manager.

Interestingly enough, The Last Dance was approved when LeBron James brought back his Cleveland Cavaliers from a 3-1 series deficit to an ultimate victory over the favored (73-9) Golden State Warriors in the 2016 NBA Finals.

James also famously has a habit of trying to maintain implanted tresses of hair that are divorcing him, follicle by follicle, by the hour.