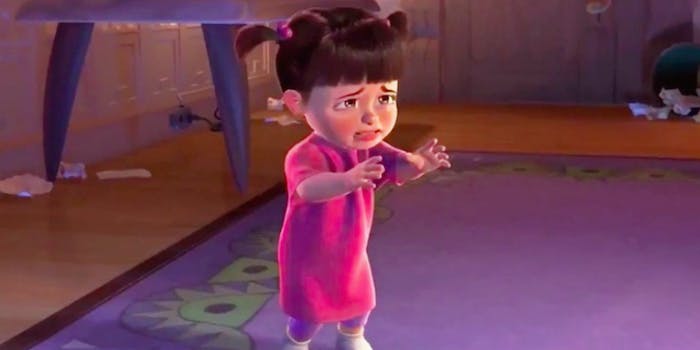 How ‘Crying Boo’ from ‘Monsters Inc.’ became a reaction meme for your most anxious moments

Stressed out about driving? There’s a meme for that.

It’s almost impossible to believe that this year marks the 20th-anniversary of Disney-Pixar’s animated film Monsters, Inc., which was released in the U.S. on Nov. 2, 2001. The film centers on two monsters, James P. “Sulley” Sullivan (John Goodman) and Michael “Mike” Wazowski (Billy Crystal), employees of the titular factory that powers the fictional city of Monstropolis with children’s screams. But because time is fluid on the internet, a pivotal scene from the beloved classic has recently manifested itself as a reaction meme online: “Crying Boo”.

Boo is the precocious toddler who inadvertently hitches a ride back to Monstropolis with Sulley one evening in Monsters, Inc. Before he can successfully return her, however, things go awry and Sulley is forced to flee with Boo in a duffel bag. It doesn’t take long before news of the breach gets out, and Mike and Sulley are stuck illegally harboring the child until they can get her back to her own world.

Audiences quickly fell in love with Boo, named so by Sulley for her plucky exclamations of surprise, and voiced by a then three-year-old girl, Mary Gibbs. In the scene in question, Sulley and Mike have successfully managed to smuggle Boo back to their apartment. But still believing children to be deadly to monsters, Mike and Sulley are initially terrified of her. When Sulley throws Mike’s stuffed toy to occupy the child, he quickly yanks it away.

Of course, anyone well versed in toddlers could anticipate the meltdown that came next, as Boo’s wailing nearly exposes all three of them.

Crying Boo memes first made their way online among Spanish-speaking Facebook users in 2017. Entire pages were created to share them, such as the Memes de Boo Llorando group that was established in 2018.

But it wasn’t until early 2021 that Crying Boo memes made their way to English speakers on mainstream social media platforms. Know Your Meme credits the below example posted to Reddit’s r/memes subreddit as one of the first popular English versions, which riffed off of the user’s fatigue of “explain a movie plot badly” memes. The post quickly gained nearly 25,000 upvotes in a matter of months.

From there, the Crying Boo memes evolved at a speedy clip, as the next iteration featured the character photoshopped behind the wheel of a car. The first known instance was shared on the Paraguayita Ñañala Facebook page on Jan. 20. A variation of the same meme (which roughly translates to “engage the clutch, release it slowly and accelerate *car turns off *”) later made its way to Twitter, where it accumulated nearly 200,000 likes and over 25,000 retweets within a matter of weeks.

Others used the meme to express the stress of driving, learning to drive, or other behind-the-wheel anxieties. Some variations also feature the Mike Wazowski in the passenger’s seat, as seen below.

By early March 2021, the Crying Boo memes evolved once again. This time, gamers photoshopped controllers and headsets onto the character to react to scary or touching video games scenes.

The firstapparently popped up on Twitter March 1, when Twitter user @FioralX posted a meme in which Boo is playing the 2017 action role-playing game Nier: Automata. “Nier fans on Route C be like,” @FioralX tweeted, convey the feelings of regret a player on that path must experience. The tweet, below, received over 12,700 likes and 2,600 retweets in just over a week.

If it’s of any consolation, Boo’s dour mood did not last for very long, and—spoiler alert—the monsters learn crying isn’t the only powerful energy source out in the world. The brief moment in the film, however, will live on the internet as the Crying Boo meme indefinitely.

This ‘Monsters, Inc.’ meme has people digging deep for their favorite songs

The ‘Monsters, Inc.’ version of Goofy is pure nightmare fuel