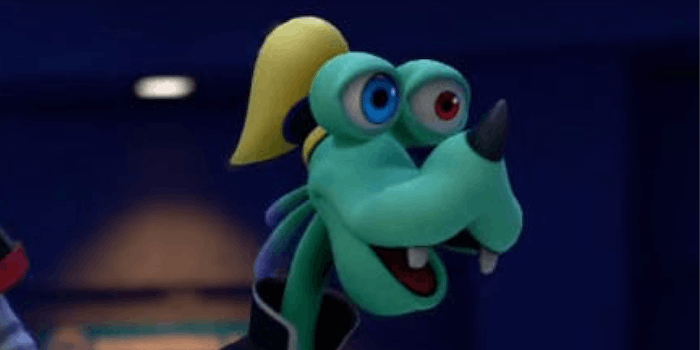 The ‘Monsters, Inc.’ version of Goofy is pure nightmare fuel

Kingdom Hearts 3 is the long-awaited new addition to a game series that combines Japanese role-playing game tropes and some of the most recognizable Disney characters. “Recognizable” is a stretch for one of the characters revealed this week, though: a green, nightmarish Monsters Inc. version of Goofy.

Gawrsh, Goofy. What have they done to you?! Kingdom Hearts was always pretty wild, as far as official Disney intellectual property goes. It’s a crossover between various Disney and Pixar movies and the game worlds of Final Fantasy developer Square Enix. But this new Goofy is even wilder. It seems that in the third game, main characters Goofy, Donald Duck, and Sora will be entering the world of Pixar’s Monsters Inc, and they’ll have monster forms themselves.

Sora and Donald look kind of cute, fitting in with Monsters, Inc. stars Sully and Mike, but Goofy… Goofy is an abomination not fit for this world or any other. His freaky design hasn’t escaped the notice of fans on social media:

Hey, what if Goofy had a job at Monsters Inc? pic.twitter.com/CvymoGeWXY

it's 4am and monsters inc world goofy is making me lose my goddamn mind pic.twitter.com/n93IIfYKrl

kh3 monsters inc goofy reminds me of scooby when he drank the potion that turned him into a monster pic.twitter.com/nrMxXacE2r

Okay but what if Monsters Inc. Goofy looked like this instead pic.twitter.com/sqZYx9e5C5

if you could just imagine for a second, if Max was in KH3 pic.twitter.com/OHLNk4FB4q

Finally figured out who monsters inc Goofy reminds me of pic.twitter.com/OlAI6elE82

Is it just me or does Monsters Inc Goofy remind you of Jar Jar Binks pic.twitter.com/EysG76AdZ9

Monsters Inc Goofy looks like a green Jar Jar Binks which is terrifying.

There is someone out there that wants to have sex with Monsters Inc. Goofy.