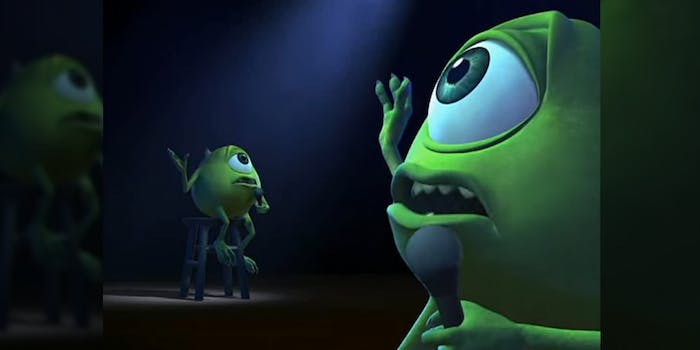 This ‘Monsters, Inc.’ meme has people digging deep for their favorite songs

We’ve all got our favorite songs that we know by heart. Whether in the shower, in the car, or in front of a room full of people during karaoke, we shout out the words at the top of our lungs, because we’re workin’ it, baby. We’re living our best lives with those songs!

So it shouldn’t come as a surprise that people are taking some of their favorite throwback lyrics and posting them to Twitter with an image of Monsters, Inc.’s Mike Wazowski singing them.

“Ne-va meant to make yo’ daugh-ter cry,” yeah, you know the words.

It’s genius, really. These songs are absolute bangers, of course, and so many of us relished that one moment where the best part came up, and we sang it with all the passion in our bodies.

[ Mike Wazowski Meme ]
Timbaland:
You tell me that your sorry
Didn't think I'd turn around
And say
3rd grade me:
That it's too late to apologize
It's too late pic.twitter.com/J6zmYBhtTp

Akon: Nobody wanna see us together, but it don't matter, no

2006 me: 'Cause I got you babe pic.twitter.com/StIbHeKzqW

“All that glitter is gold..”

Me 10 minutes ago: “..only shooting stars break the moouuooollddd..”#mikewazowski #meme pic.twitter.com/H2rQSrT7Ng

Lil wayne: I say he so sweet make her wanna lick the rapper..

4th grade me: So I let her lick the rapper pic.twitter.com/CbxbXvvOJh

But what’s the story behind the picture?

Well, we all know the cyclops Mike Wazowski as the mastermind behind the Monsters, Inc. production of the classic show tune “Put That Thing Back Where It Came From, Or So Help Me!” (an underrated bop). But he really put his chops on full display in the Monsters, Inc. bloopers, where he croons the tune “She’s Out of Our Hair” while sitting atop of a stool on a dimly-lit stage as part of the company play the monsters put on.

Here are the lyrics, if you want to sing along:

“She’s out of hair
And just when I dare to care
She says “au contraire
You’re my pair…of friends
I love you!”

It’s actually a parody of Michael Jackson’s iconic video for “She’s Out of My Life,” where Jackson can be seen in the same pose singing the melancholy track. If you haven’t been blessed with one of the King of Pop’s best ballads, educate yourself before meme-ing it up with Mike.