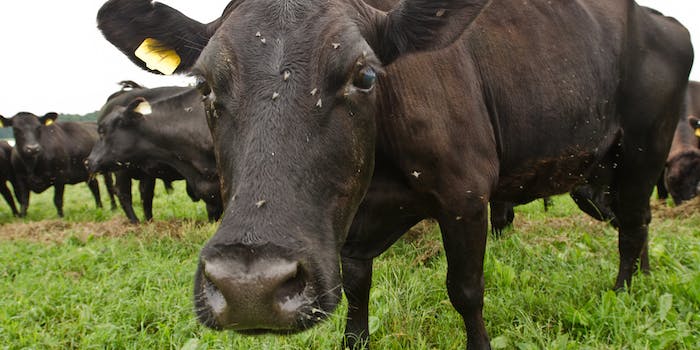 There is definitely something off about this cow.

Have you ever seen a cow that was so black, and so crisp, that you were left speechless? That’s the situation on Twitter, anyway, because people can’t get over a cursed image of a “crisp” black cow that has recently exploded in virality.

It all started on the morning of Oct. 15, when Twitter user @Xouped shared the image with the caption, “Why is this cow so CRISP?” Within a day, the image had been liked and retweeted hundreds of thousands of times.

At first glance, it looks like a perfectly normal black cow standing in a snow-covered field. And then you start to notice the, well, crispness of the cow. There’s something ethereal about the way the vanishing line of the cow’s back meets the snow—almost in a way that fills the viewer with a certain dread, like something out of a David Lynch project.

And as it turns out, that’s no accident.

This crisp black cow is actually the work of British sculptor and conceptual artist Anish Kapoor, whose best-known work includes Chicago’s Cloud Gate, otherwise known as “the Bean.” The piece in question is titled Vantablack Cow, named after the controversial material licensed exclusively to Kapoor.

Vantablack—which was originally developed by British researchers in 2014 for aerospace, engineering, and optics—is the blackest synthetic material on earth. It absorbs 99.96 percent of all the light and radiation that hits its surface and caused quite a kefuffle in the art world when Kapoor, and only Kapoor, was given access to it—leading a rival artist to develop his own deep black pigment.

All of which is to explain exactly why the crisp black cow is so crisp.

But for the rest of Twitter, the cow remained an enigma, as people came up with jokes and theories. There have been plenty of tweets about “unlocking the cow character,” referring to video games in which characters are silhouetted before a player can unlock them.

“Forbidden animal cracker,” joked one user while another surmised, “that’s the void cow.” Those were just a few of countless observations.

One person was so quick to #wellactually the cow that he didn’t even notice that it wasn’t real.

Though a few people seemed to be in on the joke:

Should you ever encounter a crisp black cow like this in real life, you can relax knowing that it’s probably just a work of art. Either that, or you’ve accidentally stumbled into the town of Twin Peaks.