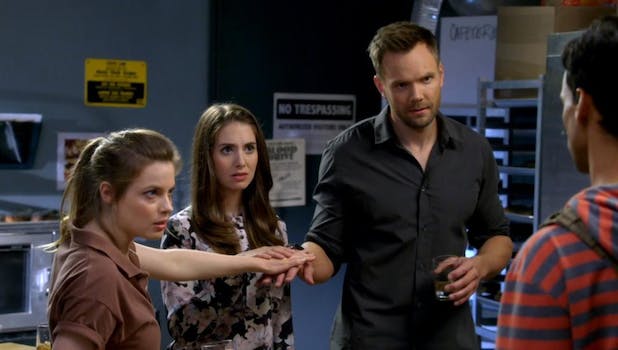 The show should have stayed in its grave.

Community had always been a ratings underdog on NBC, facing cancellation throughout its run. The network cut seasons short, shifted the schedule, put season three on an indefinite hiatus, Sony Pictures Television fired showrunner and creator Dan Harmon before the fourth season, and then rehired him for the fifth before finally giving Community the boot—all of this in spite of glowing reviews from critics and a strong cult following. In a move to cash in on the success of streaming sites like Netflix, Hulu, and Amazon, Yahoo! Screen picked up Community for a sixth season after Sony had shopped it around to streaming sites.

However, it’s hard to say whether or not Harmon’s series is here to stay. Despite being picked up by the undying dinosaur of the Internet Age, maybe it’s time for Community to call it a day.

Harmon himself wears his skepticism on his sleeve. “I privately feel like Yahoo is treating the show so well that in their minds it has to be temporary,” he told the Daily Beast. “Their strategy must be, ‘Let’s bring Community onboard as this land bridge, and we can parade people across its corpse onto our new original content.’”

He’s got a point. After Community, Yahoo will step up to the plate with original series from Paul Feig (Freaks and Geeks) and Bryan Gordon (The Office). Drawing in Community’s built-in fan base would exponentially increase the channel’s viewership. As with television, content will attract viewers, viewers will attract advertisers. The world keeps spinning. While Yahoo packages Community as a gift to fans who demanded a streaming service pick up the show, it still smells like a marketing stunt.

Nevertheless, the season six premiere, “Ladders,” is good. The episode brings everyone up to speed via Dean Pelton’s (Jim Rash) announcements through the Greendale P.A. The dean reminds us which of the show’s core cast are still around: Jeff (Joel McHale), Britta (Gillian Jacobs), Abed (Danny Pudi), and Annie (Alison Brie). Shirley (Yvette Nicole Brown) is no longer on the committee, as she had to move south to take care of her father in Atlanta and took a job as a personal chef to a “brilliant but troubled Southern detective.” Troy (Donald Glover) and Pierce (Chevy Chase) are long gone.

This isn’t the first time Community’s had to right the ship. After Sony fired Harmon for his apparent disregard for his bosses—they constantly butted heads over the creative direction of the show—the series had to carry on without him. As a result, season four was notably bad without Harmon. According to Vulture, the cast lobbied for his return: “The show’s cast, led by Joel McHale, heavily lobbied Sony to seek a rapprochement with Harmon. The belief among the actors was that the show was ‘less special’ without Harmon guiding the ship, and his return would help energize the gang for a fifth season.”

But the fifth season brought on challenges of its own with actors bailing out of the series: Donald Glover left to pursue stardom with Childish Gambino, and Chevy Chase went to presumably go pick a fight on another set. It’s definitely commendable to continue producing a show after such harsh blows from execs and actors. But with each return, Community increasingly became an imitation of itself. The postmodern magic began to wear off.

Like Yahoo, Netflix picked up network reject/fan favorite Arrested Development. The Bluth family saw the light of day once more in May of 2013, just two months before the release of Orange is the New Black. While the move was celebrated, as fans had long petitioned FOX to bring back the series since its 2006 cancellation, critics and fans were mostly underwhelmed. The new structure of the series, which told a single story from a different character’s point of view each episode, created a narrative tedium. The strength of the series was in its ensemble, and because of the busy schedules of many of the actors, they could rarely share scenes. Creator and showrunner Mitch Hurwitz often used doubles or green-screened the actors when the opportunity arose.

The freedom awarded by the Internet is arguably the downfall of rescued sitcoms like Arrested Development and Community. Both had to compress complex conceptual storytelling into 22 commercial-friendly minutes, while also adhering to network standards and practices. In the case of Arrested Development, the show’s writing during its run on FOX toed the line of decency, resulting in dialogue full of clever innuendo, lest we forget Tobias Funke’s (David Cross) unfortunate professional portmanteau (it’s an analyst/therapist).

Should we have to wait for these shows to get their sea legs or, in the case of Community, constantly recover from near death experiences? What’s so bad about seeing a good show go, anyway? There’s something to be said for knowing when to quit.

Holding on to Community could stifle Dan Harmon’s creativity, as well. I’d much rather see Harmon move on to a different project. Between Community’s fifth and sixth seasons, Harmon created the brilliant animated series Rick and Morty on Adult Swim. An imagining of Back to the Future where Doc was an alcoholic and Marty McFly was a naïve teen dealing with the trauma of cross-dimensional travel, Rick and Morty takes that signature Dan Harmon self-referential style and shoots it through the atmosphere. If Harmon’s afraid he doesn’t have any juice left in him, Rick and Morty proves otherwise.

“I don’t have anyone else to blame if this season sucks,” Harmon says. Maybe not. It’s too soon to tell how the sixth season will turn out, all I can do is hope for the best. But at the end of the day, those first three seasons, the strongest in Community’s now six-season run, are the ones audiences will remember. Sometimes it’s best to go out on top.