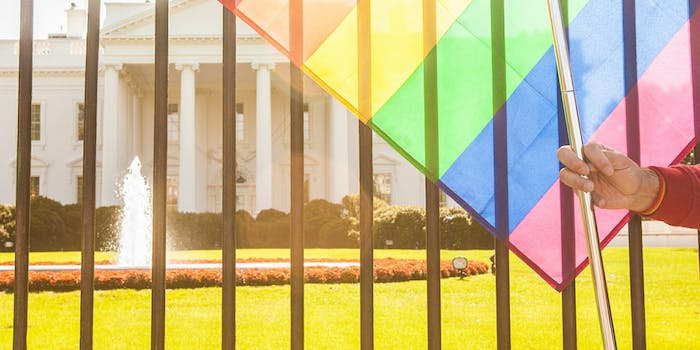 Why Coming Out Day still matters

For trans people and asexuals, coming out isn't just about visibility. It's survival.

When the LGBT community first celebrated National Coming Out Day in 1987, the act of coming out itself commonly cost a person their family, their friends, their job, or their lives. Twenty-seven years later, in an era of corporate-sponsored pride events, nationwide marriage equality, and rainbow Dorritos, it would be tempting to think we no longer need we don’t need to set aside a day to observe the act of coming out or have a hashtag to celebrate it. This Sunday marked the 28th annual #ComingOutDay.

Unfortunately, that’s not the case. While hate crimes persist for gays and lesbians and bisexual folks deal with bigotry in and outside the community, they have found significantly increased acceptance over the last quarter century.

However, the gains have been far slower for other gender and sexual minorities—particularly transgender people and those on the asexuality spectrum. Coming out is still a scary and difficult process for any queer person, but trans people still face the most extraordinary backlash for living authentically, while asexual folks are often entirely erased and ignored. Both deserve the same support in their coming out journey that has helped unify the LGB portions of the community for the last 27 years.

In the wake of Caitlyn Jenner’s Diane Sawyer interview, there’s been increased attention around transgender people—but the rest of us don’t get a primetime interview and reality TV show when we come out. Jenner’s prominence might suggest it’s getting better for the trans community—but for many, that progress is slow.

The gains have been far slower for other gender and sexual minorities—particularly trans-gender people and those on the asexuality spectrum.

While the community has boasted a number legal victories over the last few years, transgender people (especially trans women of color) still face horrific and disproportionate levels of violence, discrimination, poverty, and homelessness. So far this year, 20 trans people have been murdered—and 2015 is far from over.

While the number of Americans who know a transgender person has doubled in the past seven years, awareness about trans lives far lower than for lesbian, gay, and bisexual folks. This statistic is exacerbated by the historical tendency—and at one point, medical requirement—for many trans people to not disclose their trans status (commonly known in the community as “stealth”).

While events like Transgender Day of Visibility are helping us make progress in encouraging people to live their truth, coming out—for many trans people—still remains one of the most terrifying experiences of our lives. National Coming Out Day provides a support framework and celebratory atmosphere that can takes some of the edge off that fear.

Compared to binary-identified trans people, those with non-binary identities face an even more tumultuous coming out process. After all, while it can be difficult for cisgender people to understand trans women and trans men, they might be familiar with what it means to be transgender; maybe they’ve even seen an episode of Orange Is the New Black or Transparent.

But those who are genderqueer, genderfluid, androgyne, agender, and numerous other non-binary identities face essentially complete ignorance and bewilderment from their friends, family and coworkers.

Despite existing in numerous cultures for centuries, even the very concept of non-binary gender identities only came into western LGBTQ communities in the 1990s—and are only within the last couple of years coming into any degree of awareness within the wider cisgender population. While some progressive college campuses have pushed to recognize gender-neutral pronouns (such as “they” and “zie”), as well as installing inclusive restrooms for trans and non-binary people, that fight remains is an enormous struggle in many spaces.

Even within the LGBT community, non-binary trans people often don’t receive the support they need and struggle with numerous misconceptions—like that they’re “confused” about their gender or that their identity is simply a “fad.” “Non-binary people are so marginalized that our genders do not occur to most people, except as a bad joke,” wrote Adrian Ballou in an article for Everyday Feminism. “We have no high-profile role models or political representation.”

National Coming Out Day provides a support framework and celebratory atmosphere that can takes some of the edge off that fear.

Non-binary folks also face even lower levels of awareness of their identities among medical professionals and struggle to access the care they need if they desire a medical transition.

In essence, trans people—whether binary or not—face an enormous mountain to climb when they come out, and non-binary folks are often climbing that mountain without a rope. This is why a #ComingOutDay for them remains so necessary—in order to support them as much as possible during that tumultuous time and help make other people aware of what their journey means.

While trans people face losing everything when they come out, at least we have the limited luxury of not being completely ignored. People who fall on the asexuality spectrum struggle with even being included within the gender and sexual minorities umbrella (whichever set of letters you chose to use to represent it). Few people have ever heard of asexuality, and even fewer understand that it also exists in a as a spectrum, much like sexual attraction orientations.

Given that a considerable amount of LGBT discourse—and really, much of our lives in general, LGBT or not—center around sexuality and attraction, asexual people often feel socially isolated, since they lack the experiences and feelings those around them enjoy. Like many other gender and sexual minorities, asexual spectrum people face common misunderstanding from their peers.

But most dangerously, asexual people face serious pathologizing from the medical community, as lack of sexual interest is still held a medical problem by many doctors and psychologists. That stigma makes it more difficult for asexuals to receive appropriate and supportive mental health care.

Recently, a new take on the Kinsey scale has been making the rounds on social media, one that takes into account variation on sexual orientation—as well as attraction. Called the Red-Purple scale, it provides a considerably more diverse description of the spectrum of human sexuality.

But simply recognizing asexual folks with a chart isn’t enough. Asexuality is no less common than gender and sexual identities, and they have their own rich coming out experiences that deserve to be recognized and celebrated by their community.

Trans people—whether binary or not—face an enormous mountain to climb when they come out, and non-binary folks are often climbing that mountain without a rope.

There’s a reason that coming out experiences remain an important common touchstone for the broader queer community. It can often be challenging for the different groups under that vast umbrella to relate to one another, as the experiences of, say, a cisgender gay man frequently are vastly different from a queer trans woman. That huge depth and breadth of experiences—also in terms of race, class, and disability status—frequently leaves the community fractured. National Coming Out Day, more so than any other event, highlights the universal narratives that brings us together—through the power of our shared stories.

Given the still significant struggles that all folks of gender and sexual minorities face with regards to economic equality, legal protection, and violence, that cohesiveness remains as important as ever. Every coming out story is a victory, and every one of those victories is worthy of celebration.