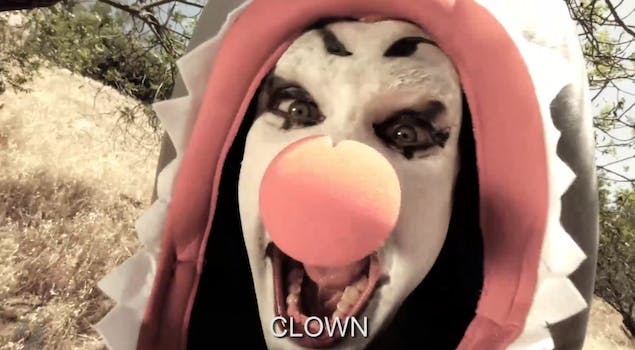 Just keep repeating "there's no such thing as clown sharks."

Probably the only thing worse than encountering a fear is having two of them come at once. A hippie finds that out the hard way when his song on how glad he is that there’s no such thing as clown sharks practically summons a clown shark right to him.

When the zombie apocalypse finally happens and you don’t have access to an arsenal full of weapons, you may have to improvise with what you already have. Sticking to his usual M.O., The Slingshot Channel’s Joerg Sprave turns a toilet brush into a slingshot weapon ready to kill any zombie you encounter.

Before Darth Vader faced attacks from the rebels, he had enough time in his schedule to sit down and watch TV, where he gets an idea on how to deal with a pesky problem from the unlikeliest of places: an informercial.

You may not have any practical use for Gimli’s axe from the Lord of the Rings trilogy, but why should that stop you from making your own version? It sure didn’t stop Tony Swatton.

Many famous YouTubers have been making “Draw My Life” videos lately, so the Boy Who Lived decided to take a stab at it. Harry Potter didn’t have such a happy childhood—and part of his time at Hogwarts wasn’t pleasant, either—but he managed to get past the hard times, defeat Voldemort, and even get the girl.