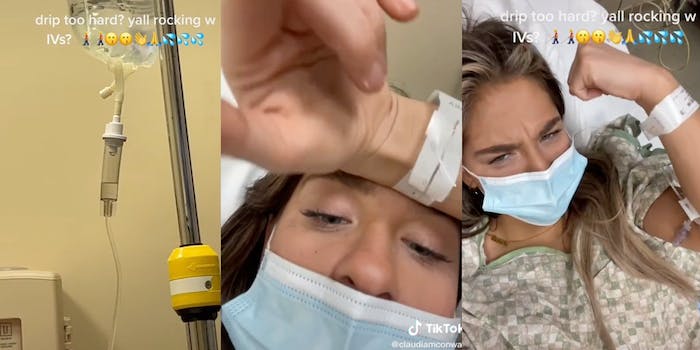 Claudia got her appendix removed in style.

Claudia Conway‘s recent trip to the hospital appears to have ended well.

The 16-year-old TikToker posted a video from her hospital room on Tuesday. Displaying to the world that she was still feeling fine, the video shows Conway swaying—gently—to “Drip Too Hard” by Lil Baby and Gunna. The caption on the video indicates that Conway may have visited the hospital for her appendix.

“Let’s hope that my appendix isn’t about to burst,” Conway’s caption for the video reads. The brief TikTok flashes past some extremely fashionable—and quite comfy-looking—slippers to show the IV at the end of Conway’s bed. The camera then flips to show Conway, masked and sporting a hospital bracelet, doing a little dance in her bed. Its popularity is quickly adding to the 75 million likes she’s accumulated on the app.

While the Beltway daughter, who recently performed on American Idol, didn’t provide any specific updates on her condition, a series of follow-up videos appear to show her doing fine. The next four videos on her timeline appear to have been posted by friends of Conway’s and her twin brother George, four teenage boys who implore Addison Rae, Sommer Rae, and Charlie D’Amelio to follow back, answer a DM, or participate in a duet. The final TikTok merely has popular TikToker Madison Beer tagged in the caption.

The videos appear to have been filmed while Conway was sleeping off her ailment. The third guest video sees one of Conway’s friends tilt the camera past a clearly occupied bed, and notes that “Claudia schleep.”

A few hours after her friends and brother hijacked her phone, Conway woke up. She posted a video in response to several comments imploring her to wake up and noted that she discovered her special guests upon opening the TikTok app. The video ends with an irritated but clearly amused sigh.

By the next video, Conway is back to her usual self. Hair done and makeup flawless, she mouths along to a “Drunk In Love” remix by Beyonce. She does appear to still be bedridden, however, as none of her recent videos see Conway moving around or dancing past the waist.

Thankfully, appendectomies—the surgery performed when someone has appendicitis—are extremely common, and one of the more simple surgeries to perform. Conway will likely be back on her feet in no time.

Until then, she’ll likely keep posting that #content from bed.