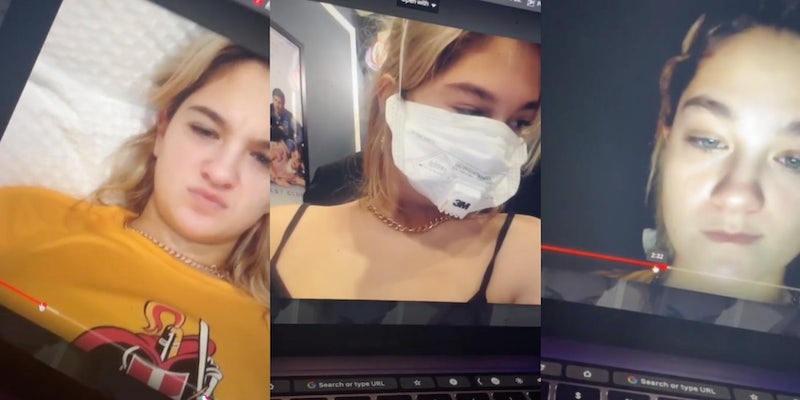 Note: This article contains mentions and depictions of physical and verbal abuse.

The 16-year-old daughter of former Trump counselor Kellyanne Conway shared proof of her abusive living situation on TikTok yesterday. The interactions she revealed were so bad they began triggering other survivors of abuse.

Two videos, shared within hours of each other, compile dozens of clips revealing an abusive and unwelcoming home. The first, titled “A COVID recap with Kelly,” offers fleeting glimpses of Conway’s life while quarantining with her mother, who tested positive for COVID-19 in early October after attending Trump’s Supreme Court nominee announcement and gave the virus to her daughter.

The videos are difficult to watch. The first video shows numerous clips of Kellyanne verbally abusing her then-15-year-old child, calling her an “asshole,” “bitch,” and “dumbass.” On several occasions, she can be heard screaming “fuck you” at Claudia, and at one point she tells her, “You’re lucky your mom’s pro-life.”

The second clip is similarly disturbing. Kellyanne mocks Claudia, verbally degrades her, and appears to physically strike her on several occasions.

Claudia’s two videos have cumulatively earned millions of views in less than a day and received a slew of sympathetic comments. Survivors of abuse warned of triggering moments within the TikToks and wondered why Child Protective Services had not yet visited the Conways.

It turns out they have. In several follow-up TikToks and comment replies, Claudia reveals that her family has, in fact, met with CPS. She even calls out the CPS officer that visited by name: “Pierre from Child Protective Services, if you’re watching this, you failed me.”

As other survivors of abuse noted, CPS calls ahead to tell a family they are coming. “Like abusive parents won’t prep you for that,” one pointed out.

In a comment on one of her videos, Claudia confirmed that her parents “put on a WHOLE show.”

In another follow-up, Claudia told viewers she wasn’t trying to “hate on my mom.”

“I just think that it’s important to tell my side of the story and my experience,” she said. She explained that the media, particularly outlets sympathetic to her mother, paint her as a “rebellious teenager” who is manipulative, petty, and vengeful, even though she is a literal child.

Online, people were shaken by the upsetting footage found in Claudia’s clips. Former survivors of abuse shared trigger warnings and explained, in their own words, how damaging situations like Claudia’s can be.

“Raise your hand if those Claudia Conway TikToks brought you back to your own abusive mother smacking you and screaming obscenities at you and now you need to find a way to wash off the stink that you try to never think about to this day,” Elizabeth McLaughlin wrote on Twitter.

“It took me years to process childhood trauma and here Claudia Conway is posting her abusive mom live on TikTok,” Twitter user @ikariiprince added. “I’m so fucking proud of these kids. Don’t let them get away with anything.”

Several TikTok and Twitter users urged Claudia to seek emancipation. But she has apparently already pursued this route and told one commenter that she has “tried and talked to many lawyers.” Due to her parents’ “high profile” status, she has been unable to emancipate herself from them.

After several viewers also urged Claudia to record a video declaring that she would never leave social media of her own accord, the teen delivered.

“I will not leave social media on my own accord, and if I stop posting or whatever—not me,” she said in a video.

Claudia’s most recent video at the time of this writing was posted late last night. She said the police arrived at her house that evening, but she was home alone. The cops did a brief wellness check—according to Claudia, they essentially just asked if she was “good”—before dipping.

Despite the harrowing videos Claudia posted, several commenters still felt the need to put her on blast. Some people accused the teen of editing her videos “for sympathy,” and one person went so far as to call her (and her entire generation) “pussies.”

“No respect for parents, which is why she’s flipping out on you,” the user added.

As many viewers noted, no amount of attitude, rebellion, or disrespect from a child warrants abuse. Kellyanne’s responses to her daughter in the shared videos are unacceptable under any circumstances.

In her latest TikTok, Claudia said she “[felt] like an awful person” for exposing her mother’s actions. While she acknowledged that this was likely the result of her mother’s gaslighting, she still expressed guilt and fear over posting the videos.

Claudia Conway did not immediately respond to the Daily Dot’s request for comment.