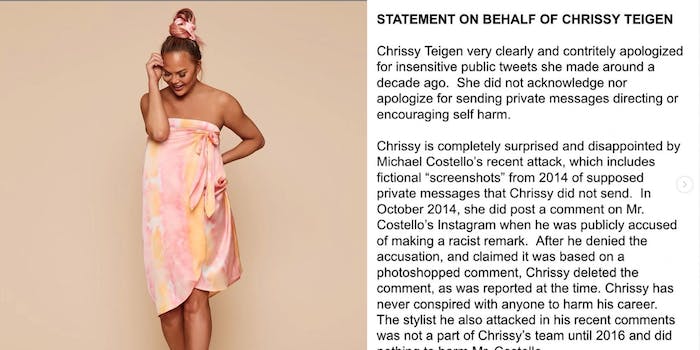 ‘This exchange was made up’: Chrissy Teigen and John Legend speak out against ‘fake’ Michael Costello DMs

Teigen threatened legal action on Instagram. Costello has since deleted his posts about her.

Chrissy Teigen and John Legend have both spoken out against “fake” DMs from fashion designer Michael Costello, with Teigen threatening legal action on Instagram.

These DMs—which Teigen and Legend have claimed are fake—have been investigated by Business Insider’s Kat Tenbarge, who pointed out parts of the DMs that don’t add up. These include the color of the DMs, the verified status of Teigen’s account, and other features which were not available on the Instagram platform in 2014 when Costello claims these messages were sent.

The messages show a conversation in which Teigen “bullies” Costello after he was accused of responding to a Black designer with the N-word in an Instagram scandal.

The Daily Dot previously reported on the content of these DMs and what led up to them.

Teigen shared her statement on Twitter, which says that she had been under the impression that her relationship with Costello was ‘cordial’ and acknowledges a comment that was left on a photo regarding the Instagram scandal, which was later deleted. She also shared screenshots of friendly Instagram DMs from Costello from the past three years.

“No idea what the fuck michael costello is doing,” Teigen tweeted alongside her statement. “He just released a statement where he didn’t at ALL acknowledge how fake the dm’s were, & now claims to have emails that don’t exist. So while he conjures those up (hopefully with someone more talented in fakes this time), here.”

When she shared the same statement on her Instagram account, Teigen initially wrote a warning in the caption, telling Costello that she will take him to court if he continues, with any money won through a court case being donated to an anti-bullying charity. The caption has since been deleted.

Her husband, John Legend, has also tweeted about the incident, citing the Business Insider story which parses apart aspects of the DMs.

“Chrissy apologized for her public tweets, but after her apology, Mr Costello fabricated a DM exchange between them,” Legend tweeted. “This exchange was made up, completely fake, never happened.”

Costello’s response was posted to his Instagram account, indicating that he would be taking a break from social media and would not be commenting on the matter again. The post has since been deleted.

“‘No Idea what the fuck Michael Costello is doing,'” Costello’s post read, quoting Teigen. “‘So while he conjures those up (hopefully with someone more talented in fakes this time),’ The fact that Chrissy Teigen and her crisis team are working so hard, so strategically to come out against the DM’s she sent me, and to downplay the comments she publicly posted on my Instagram, only proves that she is the same bully she has always been, despite her fake apology to the public.”

Costello’s statement continued, alleging that Teigen has “gone out of her way” to shut him out of projects she was involved with.

The Daily Dot has reached out to representatives for Teigen, Legend and Costello.