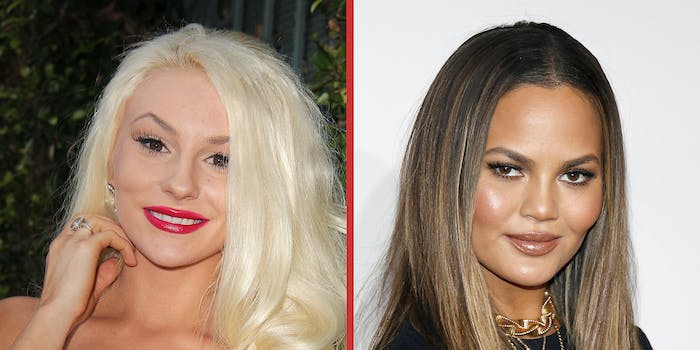 Courtney Stodden rose to fame in 2011, after marrying 51-year-old actor Doug Hutchison at the age of 16. Ten years on, Stodden is reevaluating their ten-year career as a reality TV star—including the cruel and exploitative treatment they faced as a teenager in the public eye.

In an interview with The Daily Beast, they brought up some unpleasant experiences at the hands of other celebrities. According to Stodden, TV personality Chrissy Teigen harassed them on Twitter during the early years of their fame. “She wouldn’t just publicly tweet about wanting me to take ‘a dirt nap’ but would privately DM me and tell me to kill myself,” said Stodden. “Things like ‘I can’t wait for you to die.'” Stodden also said that Joy Behar called them a “slut” and Courtney Love called them a “whore,” with other celebrities “acting like playground bullies.”

Teigen is already a divisive figure on Twitter, and she has suffered from cyberbullying and harassment herself. But these old tweets about Stodden are inspiring a new wave of backlash, suggesting a certain hypocrisy within Teigen’s warm and likeable celebrity persona. Responses to the Daily Beast interview accuse Teigen of being a “mean girl,” pointing out that Stodden was a vulnerable teenager at the time.

The tweets in question have now been deleted, but they were screencapped last year when Stodden mentioned them in a YouTube video. Back in 2011 and 2012, when Stodden was 16 or 17, Teigen tweeted several jokes mocking Stodden’s appearance and behavior. She also hinted that Stodden should kill themselves. One tweet fantasized about Stodden taking a “dirt nap,” while another suggested that Stodden should “go to sleep forever.”

At this point, Teigen was in her mid-twenties and already an established celebrity. Meanwhile, Stodden was a teenager, famous for a controversial marriage that they’d later describe as abusive. In their divorce announcement on Instagram last year, Stodden wrote, “I’ve been scared to even speak up about feeling groomed or being verbally abused during the almost 10 year marriage because I was a child and he was 50 when we married.”

Stodden became famous via an exploitative industry, appearing in tabloids and reality shows (beginning with Couples Therapy) that invited strangers to pass judgement on their personal life. This all happened at an age when most people are still in high school. Chrissy Teigen’s tweets echo the way many people reacted to Stodden at the time, treating their life as a joke. But while Stodden has mentioned several times that they found Teigen’s tweets hurtful, Teigen still hasn’t publicly addressed them or apologized.

Update May 12, 4:30pm CT: Chrissy Teigen has publicly apologized for her past tweets about Courtney Stodden, saying, “I’m mortified and sad at who I used to be. I was an insecure, attention seeking troll. I am ashamed and completely embarrassed at my behavior.”

“I have worked so hard to give you guys joy and be beloved and the feeling of letting you down is nearly unbearable, truly,” she added. Teigen also said that she contacted Stodden privately, but Stodden said in an Instagram post that they have “never heard from her or her camp in private.”