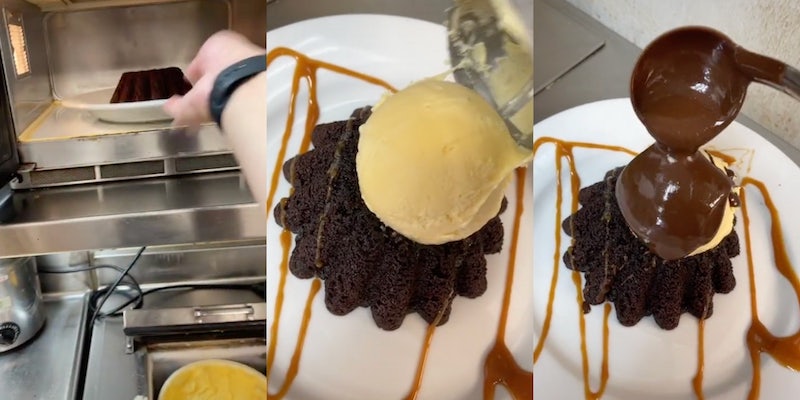 A Chili’s employee has “exposed” how one of the restaurant’s signature desserts gets made in a viral TikTok.

TikToker @braddd738 uploaded the video exposé on Chili’s molten chocolate cake two days ago. It has already surpassed 2 million views, though most people were unimpressed with the bombshell revelation, judging by the comments.

Once the cake is done heating and its fudge center looks sufficiently molten, @braddd738 drizzles it with caramel sauce. He then puts a scoop of vanilla ice cream on top and drenches the whole thing with a heaping scoop of chocolate shell sauce. Voila, molten chocolate cake.

@braddd738 may have misjudged customers’ expectations of Chili’s cuisine, as most commenters were unsurprised to learn the molten chocolate cake is prepared in a microwave.

“Okay? Ion see nothing wrong with it I knew y’all wasn’t baking a cake back there it ain’t say chili’s bake shop on the sign,” @_zacharyyyy commented.

Even after seeing the video, many viewers still chose to stan the molten chocolate cake.

“Y do u act like we care,” @livemayg99 asked. “U could’ve heated it up with ur breath n I would’ve been happy still.” (Hopefully not in a pandemic.)

The molten chocolate cake video did raise a few questions, though. @sourjinxy demanded to know, “Then why it always take 30 minutes.”

Other viewers roasted @braddd738 for potentially jeopardizing his job for an unremarkable TikTok. Chain restaurants are notoriously prickly about employees sharing their kitchen secrets: In August, a Chick-fil-A worker claimed she was fired after “exposing” menu hacks on TikTok.

As of yesterday, though, @braddd738 still appears to be gainfully employed, uploading another video “exposing” how to make Chili’s skillet chocolate chip cookie—and once again failing to surprise many viewers or dissuade them from ordering it.