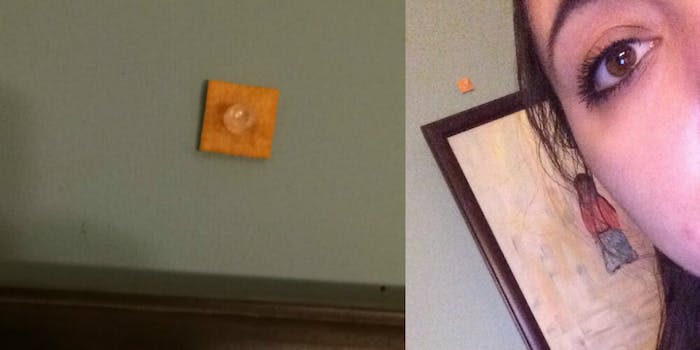 Sara Smith documented the four-year-long experiment in real-time on Twitter.

A Twitter user documented her four-year-long experiment of having a Cheez-It planted on a wall in her house to see if her dad ever took notice. Her experiment came to an end on Oct. 6, a day now memorialized in Sara Smith’s Twitter bio.

In 2015, Smith pinned a Cheez-It on the wall after being inspired by another Twitter user who did the same thing with a chip. The other user’s dad was seemingly more acute because he noticed the chip within weeks.

Smith tweeted that it had been a few hours, then a few weeks, and then a few months of her dad not noticing his new, crispy cheddar home decor. “Stay tuned to see how long it takes him to notice (it’ll be a long time),” Smith very correctly stated.

so far it's been a few hours. stay tuned to see how long it takes him to notice (it'll be a long time)

@sarasmithh97 day 10 and it is still there, stay tuned to see how much longer it will take my dad to notice it pic.twitter.com/YsdxTS6TlB

@sarasmithh97 day 55, I just got home from being in Texas for 2 weeks yet dad still hasn't noticed it :-) pic.twitter.com/6GgIJ7yrMr

On day 122, Smith announced that her father rearranged the furniture and obstructed the view to the Cheez-It with a bookcase, prompting Smith to find a new home for it. Somehow, despite moving the bookcase right in front of it, Smith’s father was still unaware of its presence.

@sarasmithh97 idk what day it is im too lazy to figure it out rn but just know its still there my dad hasn't seen it pic.twitter.com/S9MfsN0Kao

day 122, dad rearranged furniture and moved a bookshelf in front of the cheez it so it had to be moved a few feet pic.twitter.com/wbYLayT8w9

Smith then announced that she would be leaving for six months and created a poll on Twitter. “Should I tell him about it now, or leave it he won’t notice?” she questioned. Users overwhelmingly voted for Smith to leave the Cheez-It in its seemingly permanent home.

I fucking forgot that I'm about to leave for like 6 months and my dad still hasn't found the cheezit SOS!!!! should I:

The next update came on day 563 into the experiment, when Smith assured avid followers that she makes sure to replace the Cheez-It every so often because “they get gross and need to be replaced.” She was on Cheez-It number three at the time.

bet y'all forgot about this thing cause i sure did!! day 563!! (except this is actually cheezit #3 bc they get gross & need to be replaced) pic.twitter.com/gDlnozHC6R

Two years later, Smith announced that she had moved out of the house–but not to fret, because her stepmother was in on the Cheez-It stint and was keeping her updated.

this was a conversation with my stepmom on thanksgiving pic.twitter.com/ofD05Z3CVy

Eventually, Smith was practically begging her father to see the Cheez-It. She even gave him a box of Cheez-Its for Christmas as a gag gift. “Day 750. im kind of getting tired of this, i thought he’d notice much sooner. i honestly might put another one somewhere,” Smith tweeted.

Obviously the gift went over his head.

On year three, Smith posted a video of her dad with a notable feature from Mr. Cheez-It III.

you’d think that a cheezit stuck to the green wall above your pet’s tank would grab your attention, but alas….. it has been over 3 years pic.twitter.com/MHFOHlstn0

However, on year four, the gag was up, but not because her dad noticed the Cheez-It. Smith’s brother-in-law spoiled the fun and told her dad. “He’s not going to be punished! lol the internet is harassing him enough,” Smith told the Daily Dot of her brother-in-law.

What a fucking narc https://t.co/NcHx1Qt2Ib

“Thank you to everyone who’s supported the cheezit & i through the years, im sorry my naive family didn’t understand that when it rots you simply replace it. i’m just disappointed as you all are,” Smith wrote. “Also i’m SO mad that we will never know just how unobservant my dad is.”

But others assured her that four years was more than enough time to make an assessment on Smith’s observational skills–or lack thereof.

i’d say 1,410 days is enough to conclude that your dads pretty damn unobservant

Smith told the Daily Dot that she “did not expect this level of attention at all. It didn’t take off until just now when it ended. Until then, nothing had more than 100 likes, maybe.”

However, “everyone that has followed from the beginning is proud.”

Now, Smith’s Cheez-It challenge is inspiring others to take up the challenge, just like Smith was once inspired. “Issa cheezit challenge!!! lol keep ur eyes peeled it might be happening to u!!” Smith wrote.