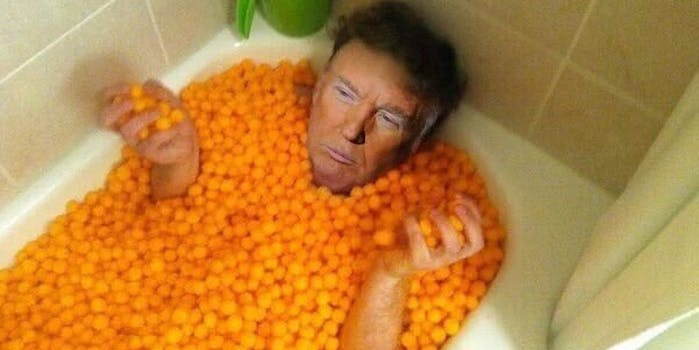 Is ‘Cheeto Jesus’ the Trump nickname that will finally stick?

The power of #CheetoJesus compels you.

Things have gotten real cheesy for the Republican party, and we’re not talking about their usual brand of second-grade humor.

Prominent GOP operative and consultant Rick Wilson has loudly condemned his party’s support of presidential candidate Donald Trump. Wednesday night he got his frustration out the way anyone with internet access does nowadays: with a fiery tweetstorm.

Over the course of ten tweets, he wrote:

How the actual fuck does anyone at the RNC have standing to act shocked that Trump is not doing the basics of campaigning? You can’t elide over his utter dipshittery. No matter how much you try to act surprised, you own this. You’re covered in his stench. History will be so cruel to you. Your off the record sniping and grumbling is no substitute for moral courage. That’s so DC. You won’t escape the stain. It’s like a big, visible “No Ragrets” chest tat that will mark your careers forever. Go public. Man up. Show courage. Say what’s in your hearts; he’s insane. He’s poison. He’s doomed. He’s killing the Party. None of you are good enough to spin the unspinnable ratfuck that is Trump. None of you can say, “I was just following orders.” This weekend, people were lined up hundreds deep to give blood to the victims of Orlando. Your Cheeto Jesus was praising himself. There is no better Trump. There is not Presidential Trump. He is a vile stain on the this Republic. Your resumes will always read “Worked for a batshit crazy crypto-fascist who destroyed the GOP”

There’s obviously a lot to unpack there, but the expletives and rawness just make you want to keep on reading and reading. And major props to the reference of the “No Ragrets” chest tattoo from We’re the Millers. But, of course, the tastiest morsel in all this delicious hilariousness is:

8/ This weekend, people were lined up hundreds deep to give blood to the victims of Orlando. Your Cheeto Jesus was praising himself.

Chee-to. Je-sus. If Wilson wasn’t so caught up in politics, he could definitely compete with some of the shadiest queens on RuPaul’s Drag Race, because that burn is searing.

Joseph and the Virgin Mary might have been Regular Jesus’s parents, but Wilson has given birth to Cheeto Jesus. Since the tweetstorm, the internet has had a field day powdering Trump with some heavy Cheeto dust and transforming him into the snack messiah, or simply finding Cheetos that look like the former reality television host.

.@TheRickWilson came up with the perfect name for disaster Trump!#CheetoJesus & his sheep Cheeto followers! pic.twitter.com/1AwfRpKFHK

But is Trump as Cheeto Jesus a fake savior? Duping the populace into becoming disciples for a fake cause? Because it looks like the real Cheeto Jesus was discovered in 2013.

Also, does all of this make Chester Cheetah God?