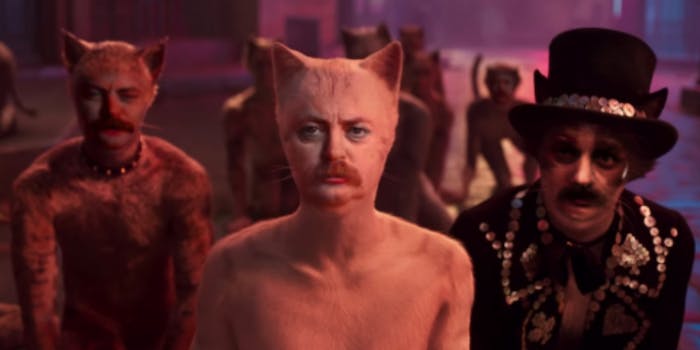 Offerman was photoshopped into 'Cats.'

Though people typically love cats on social media, they aren’t so in love with the newly released Cats movie trailer. Since its debut on Thursday, fans have been dragging and meme-ing the adaptation to hell. The general consensus is that the movie looks creepy–and its CGI effects are to blame.

On Thursday, one person suggested a quick fix that many are ready to get behind: Simply make all of the characters in the movie Nick Offerman. Disney artist Joaquin Baldwin photoshopped Offerman’s face onto the “cats” from the film, along with the caption, “Cats (2019) but every character is played by Offerman.” After seeing the photos, some think it may not be such a bad idea, including Offerman himself.

Offerman responded by tweeting, “Let’s do it!” Now the internet is waiting patiently to see if anything will become of the ingenious suggestion. At the very least, fans are expecting a cameo from Offerman as a grumpy cat.

Cats is set to premiere in December of 2019