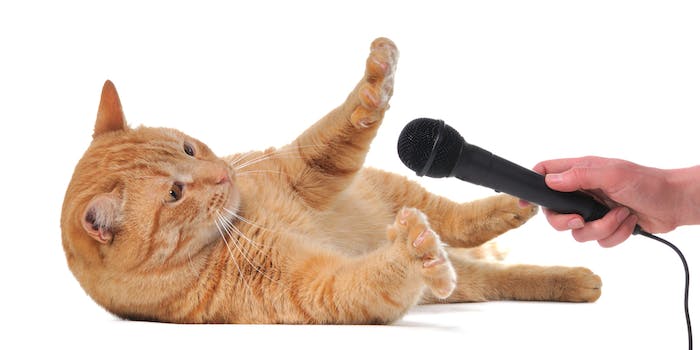 These cats meowing into microphones are the purrfect new trend

Cats are the new pop stars.

Every time it seems like the internet may have moved on from cat videos, a fresh wave of feline fun bursts onto the scene.

The latest iteration of cat videos has owners recording their furry friends making crazy noises into karaoke microphones, and yes, it’s totally worth obsessing over.

As lovable as cats are, they’re also ferocious creatures whose behaviors and goals can never be understood by us mere humans. So to have their already-foreboding meows and whines amplified into something even more unnerving with the addition of reverb is…actually incredibly appropriate for tiny fierce beasts.

The trend seems to have largely originated from a video posted to TikTok back in December, and though it has since been deleted, it’s still managed to inspire plenty of other cat people to coerce their little pals into the spotlight for their star moment.

i have amassed a collection of cats singing into microphones pic.twitter.com/pS0m2BTXzh

ngl mango brown kinda owns my heart this baby is so loving pic.twitter.com/Y5B5DeRq1Q

My son’s going to be a star . Guys please make him famous pic.twitter.com/G5Vp2X8780

And, despite this genre of video likely foreshadowing the sounds of the inevitable cat-apocalypse, the internet can’t seem to get enough of it.

As beautiful and flawless as all of these strange little cats are, it almost feels a little bit like Feline American Idol up in here. Will one of these kitties rise to true fame? Is the next Grumpy Cat lurking amongst these crooning cats? Might a star be born?

Who knows, but it’s definitely worth watching at least a couple more cat videos to find out. Or a dozen. Or a hundred. Cat videos are forever.