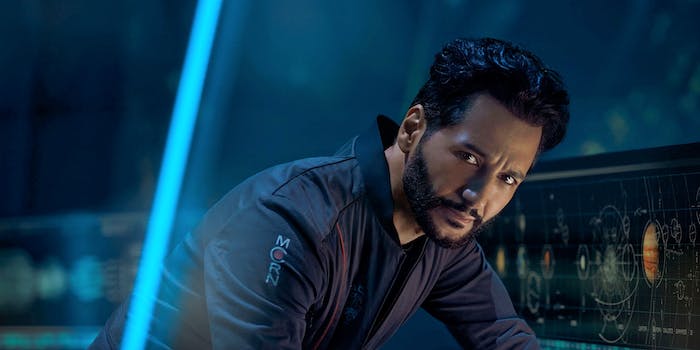 He allegedly targeted fans at conventions.

Cas Anvar, one of the lead actors in Amazon’s cult sci-fi series The Expanse, has been accused of sexual assault and harassment by several people, prompting an investigation behind the scenes of the show. He allegedly targeted fans at conventions, including some who said they were teenagers at the time.

These individuals came forward on Twitter and Reddit during the recent wave of sexual misconduct allegations in geek culture, echoing similar stories about influential figures in the video game and comic book industries, and in sci-fi/fantasy publishing.

Anvar also voices a character in the Assassin’s Creed franchise, and many of these accusations involve Anvar approaching fans at conventions, where he allegedly assaulted or harassed them. Other accusations involve Anvar harassing women under the guise of professional networking in the video game industry, with one person saying she forwarded screencaps of his text messages to a convention organizer, leading them to ban Anvar from future events.

Several people said they were 17 or 18 years old when he allegedly harassed or groped them. Others posted screencaps of what appear to be DM conversations with Anvar: One where he pressures a woman to Skype him after they met at a convention, and one where he seemingly asks for help in bullying a woman to stay quiet about earlier accusations.

There’s a clear pattern of Anvar allegedly using his niche fame to coerce and harass younger fans who didn’t feel able to come forward about his behavior. Two of these stories involve a specific detail: Anvar allegedly offering fans “cab money” after groping them. A former coworker said she believed their accusations because she’d witnessed him being sexually inappropriate while working on the show Nobility.

Anvar’s career spans 25 years, including several geek-culture franchises. For the past five years, he’s starred as spaceship pilot Alex Kamal in The Expanse, a show with a passionate fan community who successfully campaigned for it to be picked up by Amazon after it was canceled by Syfy. Anvar is perhaps the most active castmember within the fandom, often interacting with fans online.

Following these allegations last week, the authors of the original Expanse novels (Ty Franck and Daniel Abraham, writing under the pseudonym James S.A. Corey) tweeted that they’d passed the accusations on to the show’s studio, Alcon. Showrunner Naren Shankar and four of the main cast members, Wes Chatham, Steven Strait, Shohreh Aghdashloo, and Dominique Tipper, all shared statements of support for the investigation, assuring fans that they were taking the allegations seriously.

In a statement to Deadline on Monday, Cas Anvar said: “I welcome the independent investigation, respect that the women who have come forward should be heard, and will make myself fully available to participate in the process as appropriate so that I may refute these very serious claims that strike at the core of what I value.”

The Expanse aired its fourth season in December 2019, and season 5 already wrapped filming in February. As with many other TV shows, announcements about The Expanse’s future have been delayed by the coronavirus shutdowns. If they’re renewed for a sixth season, it would be perfectly possible to write Cas Anvar’s character out of the show.