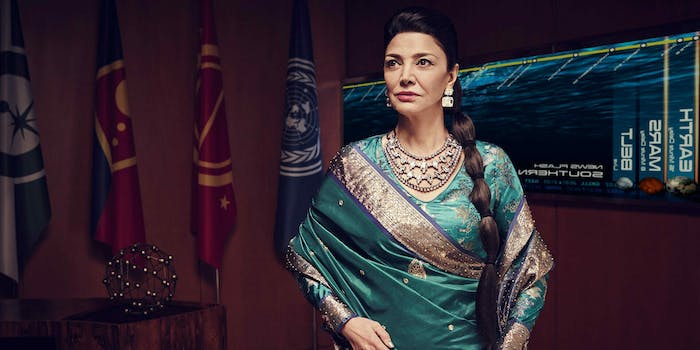 An interview with the woman behind the best sci-fi costumes on TV.

The Expanse is one of the best sci-fi shows on TV, a wide-reaching space drama that just escaped cancellation thanks to its passionate fanbase. With a unique futuristic setting, it explores three warring cultures: Earth is a wealthy yet stagnant society, Mars is home to a militaristic colony, and the asteroid belt has given birth to a new culture of “Belters,” the rebellious underdogs caught in the crossfire between Earth and Mars.

Much of this worldbuilding is tied up in the show’s aesthetic, especially costumes. Season 1 introduced the dwarf planet Ceres as the setting for a cyberpunk city, starring Thomas Jane as the neo-noir detective Joe Miller. Surrounded by distinctive Belter hairstyles and street fashion, Ceres uses a completely different visual language to the spacesuits of the Martian fleet, or the luxurious saris of Earth diplomat Chrisjen Avasarala (Shohreh Aghdashloo).

Speaking to series costume designer Joanne Hansen, the Daily Dot learned more about how this futuristic world came to life.

The Daily Dot: When you came onboard for season 1, how did you get started on the design process? Did you take much inspiration from the Expanse books?

Joanne Hansen: We tried to stay with the scripts primarily, so it was a real collaborative effort. Really we were inventing the world. We worked hand-in-hand with our production designers and prop department and set decorators.

In terms of that collaboration, how did you come up with the different aesthetics for Earth, Mars, and the Belt? They all have very different looks.

We took it from their philosophical approaches, I guess you could say. The Martians are the idealists and they’re very intent on creating a better world and having a real hierarchy, and a set of beliefs or guidelines for their living, so we tried to translate that into their uniforms and their overall approach. Everything is ordered and can be figured out in some manner.

Earthers, they believe Earth is No. 1. Earth must come first, it’s Avasarala’s mantra, and in a sense, it clings in some ways to the past. So we give [the Earth costumes] a little bit more connection to a world we recognize now. And the Belters are really… I felt like we tried to create what the future might look like in a world that blends all the various cultures.

I feel like season 1 introduces this futuristic world by focusing on the Belter setting. Are there any particular fashion trends that you enjoyed thinking up for the Belt?

We took our inspiration from the evolution of culture and the idea of how exciting it would be to see all these various languages, clothing, customs blend and form into their own kind of world. It was really that fusion that inspired us the most. Also, it’s like a contrast to the difficult circumstances they live in, of reduced gravity. The kind of work they do is always hard. They’re mining the ice and they’re first to be rationed for water, that kind of thing. It’s almost like that culture evolved in opposition to it and proudly because of it.

Kind of a DIY thing?

Yeah, it was really a chance to look at what an evolving culture would look like, I guess.

Obviously, we have to talk about Avasarala. She’s kind of the costume star of the show, with all these iridescent fabrics and gowns. What kind of research did you do when you were first conceiving her look? How to drape her sari, the combination of old-fashioned and modern styles, that kind of thing.

We wanted to ground her in a historical way but move her forward, not unlike the Belters I guess, in terms of a fusion approach. So we really wanted to open up, have no rules around draping a sari, have no rules about putting a jacket with it. Have maybe a 16th or 17th-century shape and collar with a traditionally wrapped sari, or a completely untraditionally wrapped sari. We looked to female leaders of the world and tried to just be very independent, and very female, and very powerful. And on her own terms.

To talk about the Rocinante crew for a minute, they all have similar-looking jumpsuit uniforms, but as I watched the show I began to notice that they all look quite distinctive, they’ve modified their outfits. How did you devise the visual personalities for characters like Amos and Holden?

Amos for example… we really didn’t want him to look like he ever thought about what he wore, but we wanted it to reflect who he was. The various patches of the ships he’s worked on, there’s some history there and some pride around that. He’s a real survivor and he’s loyal.

Holden… again it’s about his simplicity. A character who is trying to understand what’s right, what’s the best and right way: I’m a reluctant leader but I’m a leader, so I’m not going to worry about what I’m wearing, I’m just gonna do what I do in a very simple kind of way.

By the same token, Alex will reflect his Martian influences, so he doesn’t mind putting on the Tachi flight suit that was found onboard. It allows him to have a little connection with that while still being in two worlds. Naomi has a bit of the Belter, a bit of the Earther influence. Where is she? We don’t know exactly, so she’s able to float those two worlds a little bit.

Joe Miller is sort of the odd one out because he looks like a transplant from a 20th-century noir movie. Do you think he intentionally created this persona for himself, like he’s wearing a detective costume? And how did you decide on the perfect hat, since that’s such an integral part of his role?

There were a lot of hats, there were a lot tried on, and we eventually landed on one that felt right for him, that he [Thomas Jane] felt represented the visual identity of that character. He grounds us and connects us to a world we inhabit now, and kind of takes us with him into this new world. I think that charm of the noir is part of that, it gives him an individual feel among this whole world we’re being introduced to.

Are there any particular details in the show that fans should look out for, that might not be immediately obvious?

What is happening with the show is that we continue to build pieces of the world. We will evolve the various uniforms, the various cultures as we meet them. And individuals inside of that. In this season we see the development of the OPA [Outer Planets Alliance] uniform and what that means, what does it say about the culture. There’s never anything [in the costumes] that doesn’t have some kind of connection to a story point.

The Expanse is streaming on Netflix and Amazon. Amazon will produce the recently announced season 4.