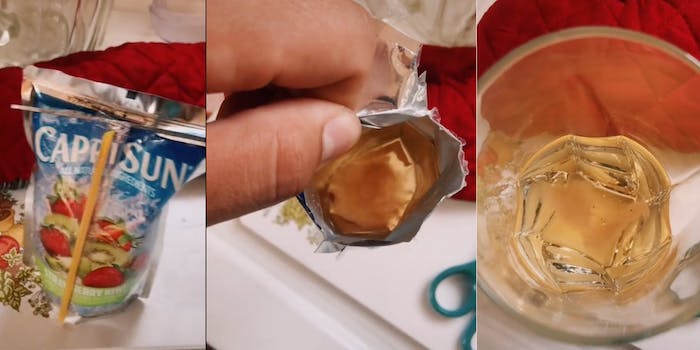 ‘The kids are drinking this’: TikToker finds mold in unopened CapriSun pouch

Viewers were divided about the mold, with some praising it as a positive thing.

One TikToker was disgusted to find his pouch of CapriSun had ‘some nasty fungus’ in it, so he inspected another packet in a viral video for viewers to see what could be lurking in their juice.

The video, which has amassed over 5.6 million views, shows the TikTok user, Victor Marcelo Aguil or @victormarceloaguilar, flipping over an unopened packet of CapriSun to show the clear bottom, which appears to reveal something floating in the liquid. Aguil then cuts open the bloated pouch and peers into the bag of juice.

“Do you see this fucking shit?” Aguil says. “This is fucking bullshit. The kids are drinking this.”

He then pours the juice into a clear cup so that viewers can better see the supposed fungus or mold. Some viewers were understandably grossed out by the video.

Other users explained that the clear bottoms on the pouches were designed for situations like Aguil’s—so consumers can see potential mold in their juice. Some folks questioned whether the pouches were stored properly or if they were expired. Aguil said in a follow-up video that the juices were new—bought and refrigerated three days prior—and the listed expiration date was June 26, 2022.

Some viewers took the mold as a positive thing, calling it evidence that CapriSun does not use preservatives.

“It’s because it has no preservatives guys,” one commenter said. “You should actually be happy about seeing the mold. Real food molds!”

“The mold is good and bad,” another person wrote. “Good because you know it’s real fruits/veggies. Bad on ur end because food molds when not stored properly. It’s [on] you not the company”

The CapriSun website has an FAQ section dedicated to finding mold in its juice pouches. The brand states:

“Although it’s rare, it is possible for food mold to grow inside containers of preservative-free juice drinks if the pouch is compromised or punctured in any way on its journey from our facilities to your grocery stores. Even if the hole is microscopic and not visibly detectable, it can be exposed to air. The mold is naturally-occurring, and we understand your concerns. That’s why we created our clear bottom pouches so you can check for mold before enjoying your Capri Sun.”

The website also clarified that the substance usually found in its juices is “food mold,” not fungus.

The Daily Dot reached out to CapriSun for comment.