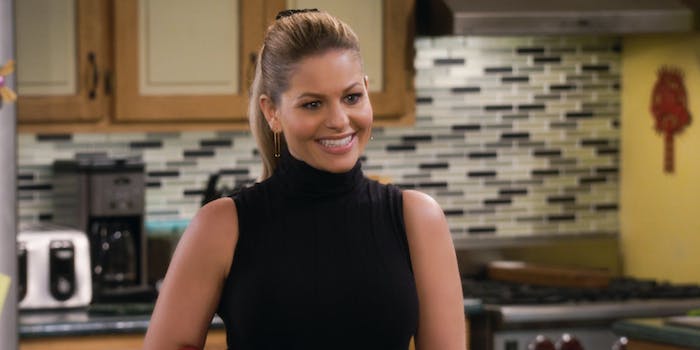 Over the weekend, JoJo Siwa posted a poolside TikTok in which she revealed the “rudest celebrity I’ve met” by quickly flashing her phone. A well-timed pause reveals it’s Bure, star of Fuller House. The TikTok has more than 20 million views.

On Sunday, Bure allegedly posted a verse from Isaiah 26:4 to her Instagram stories, though not directly aimed at Siwa. And Siwa filmed herself singing along to Billie Eilish’s “Happier Than Ever,” specifically the line “And I don’t talk shit about you on the internet/Never told anyone anything bad.”

Siwa was participating in a TikTok trend in which people reveal their celeb crushes (as well as rudest celeb interactions) by flashing a picture on their phone.

Gawker wondered if their feud, or at least Siwa’s feelings about Bure, originated on a 2019 episode of the Kelly Clarkson Show, in which Siwa (who came out in 2021) was gifted a cookie cutter set from Bure’s line of faith-based gifts. But no.

But according to an Instagram post on Tuesday, Bure says she attempted to reach out to Siwa on Sunday after seeing the TikTok, and was finally able to talk to her yesterday. Bure claims Siwa was upset that she was denied a photo with Bure on the red carpet of the Fuller House premiere in 2016, when she was just 11. Bure said she apologized for the snub, and they had a “really great discussion.”

Siwa has not publicly confirmed this, but we reached out for comment.