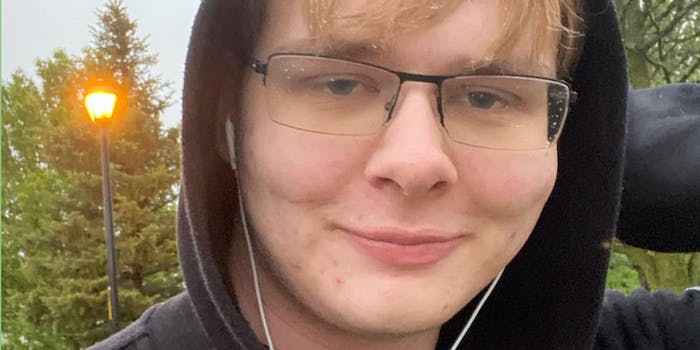 He has yet to publicly respond to the accusations.

YouTuber and Twitch star CallMeCarson has been accused of grooming underage fans.

The popular Minecraft streamer, whose real name is Carson King, began trending on Twitter Monday after a video from YouTuber Keemstar levied serious accusations against him. Keemstar, who reports on gossip within the YouTube community on his DramaAlert channel, alleged that multiple former CallMeCarson fans had come forward with stories of inappropriate messages and interactions with the 21-year-old streamer.

The Keemstar interview includes statements from several former members of Lunch Club, the YouTube collective that included King. According to Lunch Club alumni Hugbox and Traves, King was open with friends about his habit of forming relationships with underage fans. According to both members, King informed the Lunch Club team in early 2020 of an inappropriate relationship he had with a girl he believed to be 17.

“One day in March he called me… and I picked up the phone and he said, ‘I have to tell you something,'” former Lunch Club member Hugbox told Keemstar. “He revealed that he had fucked underage girls, and I think that he said that they were fans. That was what I was told.”

Hugbox said fear of legal retaliation kept him from coming forward back in March, when he first learned of King’s actions. He also indicated that King was aware that his relationships with underage girls were inappropriate but did little to change his behavior.

Twitter user @miniborb, who calls herself Sam on the platform, stepped forward and named herself as one of King’s victims.

“I can personally come out and say that I’ve been groomed by Carson,” she wrote. “At the time I was still 17 and in high school.”

Sam also shared a screen recording of the duo’s exchanges on Discord, including multiple instances in which King urged her to “add back on snap.” The majority of their conversations appear to have occurred between March and April of 2019.

While King has remained tight-lipped about the ongoing drama, it has continued to gather steam online. “Carson” continues to trend on Twitter as of Tuesday morning, with many devastated fans and former colleagues of King’s reacting to the news.

Another former Lunch Club member spoke out after the accusations arose, noting that he, too, was privy to King’s early 2020 confession.

“In an early 2020 phone call, Carson told all the Lunch Club members and our group manager that he had exchanged nudes with an unnamed girl he believed to be 17,” @Slimecicle wrote in a statement. “Because I suspected a crime had been committed, I immediately reported this information to federal law enforcement, cut all ties to Carson and withdrew completely from Lunch Club.”

Another former friend of King’s, popular YouTuber Fitz, also appeared to confirm the news in a tweet, which simply read, “yep.”

The “Carson” trend on Twitter is still going strong. Many tweets about the YouTuber come from mourning fans, who are sharing their devastation at the discovery of King’s behavior. Other diehard fans refuse to see fault in his actions, however, claiming that the relationship wasn’t a big deal because there was “only” a two-year age gap between King and Sam.

“There are literal children getting married in other countries, 17 is ok especially if hes 19, like a few more months than oh shit its all of a sudden ok, bro what?” @Vader_99 tweeted. “Bs mentality.. age of consent in like hella states is 16 too.”