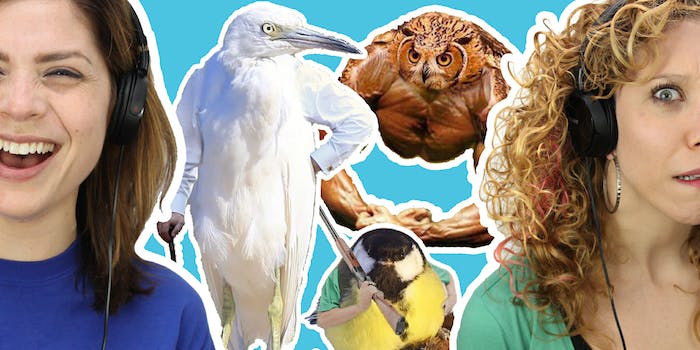 Why are ‘Birds With Arms’ so damn funny?

Welcome to the gun show.

There are subreddits for all sorts of important issues and online communities. And then there’s r/BirdsWithArms, where the internet’s most talented Photoshoppers replace bird wings with human arms just for the lulz.

Hey now, what’s all the ruckus? from r/birdswitharms

Owl be back from r/birdswitharms

This week on 2 Girls 1 Podcast, Alli and Jen (actors who perform weird internet stuff on stage) interview Konstantin, one of the community’s most talented and prolific bird ‘shoppers, about what makes these mashups so funny, and why he’s not using his powers for more important things.

We also get waaay off track and talk about the existential crisis of automation and self-driving cars.

Konstantin was also kind enough to do some custom work for us in which he added Michelle Obama’s famously fit arms onto a hawk:

And kicked off the internet’s next Photoshop craze, invented by Alli: Birds With Butts.