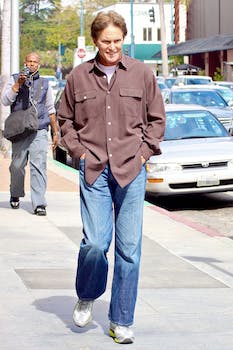 Bruce Jenner’s face is none of your business

On a recent magazine cover, InTouch Weekly photoshopped former Olympian Bruce Jenner’s face onto a photo of British actress Stephanie Beacham, thereby accentuating Jenner’s features with makeup and a decorative scarf. Jenner has been the subject of massive tabloid speculation due to the one-time Kardashian patriarch’s recent tracheal shave and gender non-conforming appearance, wearing long hair and lip gloss. While speculating about someone’s gender identity is never OK, InTouch’s behavior, in particular, makes it much more difficult for those of us for whom gender is not a forgone conclusion.

This is the transgender version of 'blackface.' It is offensive, unacceptable and transphobic.@IAMBruceJenner… https://t.co/sqRKkcpRqM

100% not interested in transphobic Bruce Jenner comments. That shit needs to go.

We opened the month with a national conversation about the death of Leelah Alcorn, a 17-year-old transgender teen who ultimately came to believe that taking her own life was a better option than having to wait until she was older to begin transitioning to the correct gender. Denied the possibility of an early transition by her conservative parents, she wrote on her Tumblr (archived here) that even if she transitioned later in life, “I felt helpless that I was just going to look like a man in drag for the rest of my life.”

InTouch just wanted to know what was up with Jenner’s face. Why was it so girly lately?

Two weeks before Leelah Alcorn’s story went viral, InTouch published an interview with Bruce Jenner’s son, Brody. The 65-year-old Jenner is the center of tabloid media’s favorite family, as well as a gold medalist, but InTouch just wanted to know what was up with Jenner’s face. Why was it so girly lately?

Brody’s answer: “It’s his business, so leave him the f**k alone. He’s living his life and he’s extremely happy.”

Two days after InTouch published this interview, they proceeded to leave Jenner the f**k alone by publishing an article entitled, “Did Bruce Jenner Get Gender Reassignment Surgery to Become a Woman?” A week later, they noted, “Bruce Jenner Shaved His Adam’s Apple One Year Ago Today,” helpfully including “A Timeline of His Confusing Transformation.” They followed this up with, to date, seven more articles dedicated to speculation about Jenner’s gender identity, and whether he was in the process of transitioning.

The last one—the only one the world got angry about, but not the only one that is stomach-churning—included a Photoshop of Jenner’s face complete with clownish-looking pink blush and garish fuchsia lipstick.

Bruce Jenner’s face is no one’s business but Bruce Jenner’s, but it’s our ethical responsibility to wonder what message the media’s gawking, hungry treatment of Bruce Jenner’s face sends to the Leelah Alcorns of the world. Would it convince them that anyone who transitions later in life will become subject to endless speculation, mockery, ridicule, and cruelty?

In the wake of Alcorn’s death, a number of upstart campaigns are looking to seek justice for her and other transgender teens facing similar circumstances, most notably the movement to pass Leelah’s Law, which would institute a nationwide ban on the practice of gender conversion therapy.

The problem is that gender conversion therapy isn’t just a harmful, debilitating, and outdated psychological practice. It’s a practice instituted by the media, and by the rest of society, every moment of every day. What InTouch is doing to Bruce Jenner’s face is something millions of Americans have done to them by society in general. The insistence to conform to one side or the other of the gender binary doesn’t stop just because you opt out, as it seems Jenner is trying to do.

Things “real” women take completely for granted are all things that I have spent my life obsessing and worrying and stressing about, day in and day out.

I am genderqueer. I identify as female, usually, because people assume I’m female when they look at me, and I usually let them because, frankly, it’s easier for me to deal with. For me entire life, the act of performing the feminine has been a constantly fraught state for me. Things “real” women take completely for granted—wearing dresses, wearing jewelry, doing makeup, wearing bright colors, wearing patterns, wearing coordinated outfits, wearing heels, walking down a street the “right” way, dealing with menstruation—are all things that I have spent my life obsessing and worrying and stressing about, day in and day out.

Because being a girl is already a hard enough job as it is, it took me an extremely long time to accept and understand that I wasn’t just excruciatingly lousy at being a girl, but rather that my brain was not wired to do gender, that it had tuned out from gender performance at an early age and never tuned back in. When I finally began dealing with the ways in which my life had been affected by my ambivalence about gender, I also had to contend with the constant contrast between the way media presents gender and the way I experience gender.

To me, gender is an act I occasionally perform at great personal cost and huge amounts of personal stress. To the tabloids and to low-brow entertainment media like InTouch, gender is a foregone conclusion, a stable part of everyone’s identity. These kinds of outlets seem no better equipped to handle concepts of non-binary gender any more than they can handle bisexuality, Renee Zellweger, or anything that reminds us that real identities can be fluid and changing. Bruce Jenner’s face is doing its thing without regard for gender norms, and the media can’t handle it.

Bruce Jenner’s face is none of my business. But his determination to present gender as whatever the f**k he feels like on any given day is extremely inspiring to me.

Bruce Jenner’s face is none of my business. But his determination to present gender as whatever the f**k he feels like on any given day is extremely inspiring to me. Especially inspiring is that at age 65, despite having an extremely famous face, he’s sending the message that not only is his face not a static public commodity, but that it can still evolve in any direction.

InTouch‘s reaction to Bruce Jenner’s face is a cruel joke reminding me that people like me, like Bruce Jenner, like Leelah Alcorn, aren’t supposed to exist in the nebulous spaces between fully cisgender or fully transitioned individuals. For trans people who are pre-transition, or who choose not to transition, the state of merely existing as you are is a fraught, potentially life-threatening state requiring a great deal of courage to maintain. For those of us who are more nebulously genderqueer, the refusal to perform gender, or to perform it in obstinately subversive ways, leaves us open to speculation, alienation, contempt, and ridicule.

The media has an ethical responsibility not to add to the pile-on of issues, scorn, misunderstanding, and hardships faced by transgender and genderqueer people around the world. And yet here we are, with scores of media outlets wondering what on earth is to be done about Bruce Jenner’s face.

Here’s a thought: Perhaps nothing should be done about Bruce Jenner’s face. Perhaps the problem is not Bruce Jenner, but rather the media’s need to determine whether his appearance is currently en route to becoming something less ambivalent. If he’d just hurry up and transition, perhaps InTouch could breathe a sigh of relief and go about its business.

Unfortunately for InTouch, reality doesn’t work that way. Real people aren’t like hockey pucks—the media can’t bat them from one goal to the other of a gender binary. That kind of thinking isn’t just dangerous. It’s also deadly.