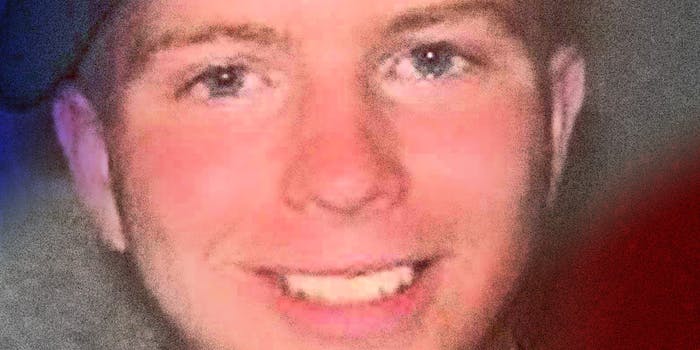 Pfc. Bradley Manning was found not guilty of his most serious charge, aiding the enemy, Thursday, but convicted of violating the Espionage Act.

U.S. Army Pfc. Bradley Manning has been acquitted of the most serious charge against him, aiding the enemy. He has been found guilty of “wrongfully and wantonly causing intelligence to be published on the Internet,” and four other charges.

Manning faces a maximum sentence of 136 years. His sentencing hearing will begin Wednesday.

He had been facing life in prison for the charge of aiding the enemy, plus 154 years for the linchpin charge under the Espionage Act that legally defines treason.

Manning waived his right to a trial by a jury of his peers, so full responsibility for rendering judgment in the case fell to the judge. Lind began deliberations Friday afternoon, when closing arguments ended.

In 2010, Manning shared 700,000 documents he had downloaded from computers at Contingency Operating Station Hammer, southeast of Baghdad, Iraq, with the whistleblowing website WikiLeaks. These documents included battle videos, such as footage of the 2007 strike that killed two Reuters reporters and the 2009 Grainai strike that killed almost 150 Afghan civilians; 250,000 diplomatic cables; and 500,000 documents that included detainee assessments, and which came to be known as the Iraq and Afghanistan “war logs.”

Manning was arrested after hacker Adrian Lamo, who had been conversing with Manning online, reported his theft to authorities in May of that year.

Prior to that, Manning is alleged to have suffered “pretrial punishments” at the Marine Corps Brig in Quantico, Va., carried out under Prevention of Injury status, which are said to have included solitary confinement, sleep deprivation and being stripped of his clothing.

Prior to the start of the trial, Manning also went through a series of pretrial hearings.

The defense’s case centered on WikiLeaks as a legitimate news organization, and the prosecution’s on the idea that the organization shared no such legitimate status, but rather, was an avenue to share the information with the enemy. The prosecution asserted that Manning was a self-celebrating traitor whose intent was to share classified materials with Al Qaeda, the defense countered that he was a naive idealist who hoped to put the brakes on the military’s “bloodlust.”

Out of the 21 charges Manning faced under the UCCJ, he already pled guilty to 10, including mishandling classified materials, which carry maximum possible penalties totaling 20 years in prison.

With the defense’s case that leaking information to WikiLeaks and other such sites is no different from leaking it to established publications like the New York Times or the Washington Post now upheld, this precedent is sure to be used in future cases.

The next step in the legal process for Manning is sentencing. His defense, led by David Coombs, plans to call several dozen witnesses in that phase of the trial. The prosecution, led by Maj. Ashden Fein, is expected to call almost as many, including 13 “classified” witnesses.

Among the considerations that will affect Manning’s sentence is the question of how much the leaks hurt the United States, the U.S. Army, Manning’s fellow soldiers and Iraqi and Afghani civilians.

As Alexa O’Brien, one of the few journalists to have covered the entirety of the trial, noted, “[T]he court ruled that motive and actual damage (or ‘lack of damage’) evidence was not relevant at trial (except to prove circumstantially that Manning was cognizant of the fact that the enemy used the WikiLeaks website).”

There has so far been no proof that the leaks have resulted in any injuries, deaths or failed operations. If proof exists, it might come out in this portion of the trial.