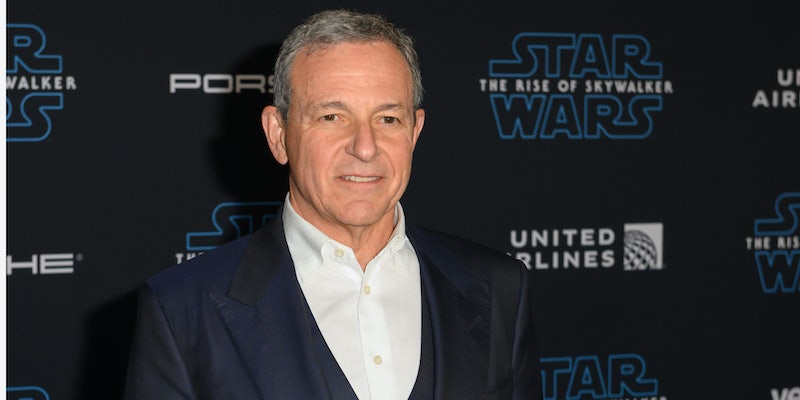 He's returning to take over for his own successor.

Disney announced late Sunday night that CEO Bob Chapek would step down and be replaced by his predecessor Bob Iger, a move that stunned much of Hollywood. But even as Disney’s future remains, for now, uncertain, the news was met by fans with a mix of relief, celebration, and speculation of what Iger should do to course-correct many of what they see as Chapek’s missteps.

The move, which puts Iger in charge of the company he stepped down from in February 2020, goes into effect immediately and is set to last for the next two years. It’s occurring just months after Chapek signed a multi-year contract to stay with Disney.

“We thank Bob Chapek for his service to Disney over his long career, including navigating the company through the unprecedented challenges of the pandemic,” Susan Arnold, chairman of the board, said in a statement. “The Board has concluded that as Disney embarks on an increasingly complex period of industry transformation, Bob Iger is uniquely situated to lead the Company through this pivotal period.”

According to Puck News, the sudden move may have been in response to Disney’s investors’ call earlier this month than in response to any specific grievance consumers or fans might have had to Chapek’s actions. But as people learned of the news—with some comparing it to Succession—many of them from people thrilled by this unexpected turn of events.

“I don’t think I’ve ever been so happy,” actor Josh Gad tweeted. “Welcome home @RobertIger ❤️❤️❤️- the GOAT is back!!!!”

It was just as easy for people to turn to memes to illustrate the, on paper, kind of ridiculous turn of events that led to Iger returning to the company he once stepped away from. While there were some criticisms about Iger’s role in monopolizing entertainment, he was largely depicted as a hero stepping in to save Disney from Chapek and itself. He was imagined as both an all-powerful being, a villain somehow back from the dead, and Disney’s version of a GOAT.

Some also imagined Iger taking a similar route as Elon Musk in making his employees swear loyalty with little guarantee of any benefits to them or payoff.

But, as people started throwing out their ideas on how Iger’s new reign at Disney might go, it showed how unsatisfied they were with Chapek’s stint as Disney CEO. He was in charge of the company when Scarlett Johansson sued Disney over its decision to put Black Widow on Disney+, with Chapek as the face of Disney’s defensive attempt to make Johansson look ungrateful and greedy. (They eventually settled.) Chapek was also highly criticized for his lack of a strong initial response to Florida’s Don’t Say Gay law, and when he did put out a statement, he was faced with both criticism for the weak statement and accusations that Disney regularly censored queer content in its movies and shows. He faced plenty of scrutiny for several changes at Disney’s theme parks, including price hikes and wait times, making the experience both unpleasant and expensive.

In recent weeks, Chapek’s comments on animation were also ripped apart online when he suggested that adults didn’t want to watch animated movies, which played into the belief that the medium is only for kids.

In a letter sent to Disney employees and cast members, Iger teased that more information about the future of Disney would be arriving in the days and weeks ahead.

“Disney holds a special place in the hearts of people around the globe thanks to you, and your dedication to this company and its mission to bring joy to people through great storytelling is an inspiration to me every single day,” he wrote.