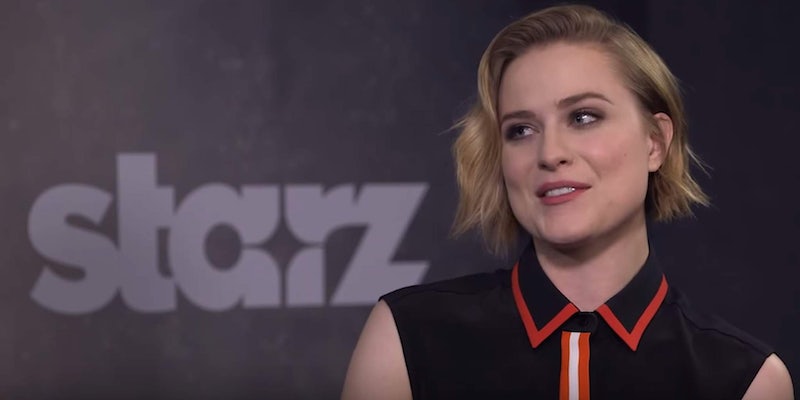 Here's how adults can really help out youth on bisexual awareness week.

Last week, just before the kickoff of Bisexual Awareness Week (celebrated as #BiWeek on Twitter), actress Evan Rachel Wood poured her heart out in a series of tweets about struggling with her bisexual identity.

“I have battled with myself most of my life because I wasn’t gay or straight enough. I used to think I would never be happy,” she wrote. “I had to go through the same panic and shame and depression a lot of people in the LGBT community go through—but when I came out a new found shame took over. Bi-shame. Feeling like people are judging you all over again but for different reasons.”

Whatever the source, such stigma is the key culprit perpetuating bi erasure and invisibility, the habit of ignoring the bisexual community and individual bi identities. And until we welcome bisexual adults into mainstream culture, as we’ve done with gay men and lesbians, it’s not going to stop.

Bisexual erasure is a byproduct of the assumption that we are all basically gay or straight. Unless a bi person is constantly affirming and announcing their bisexual identity, they’re often miscategorized based on the gender of their partner. (Same-sex partner? Gay. Partner of the opposite sex? Straight.)

Bi folks are faced with a tough decision: Declare yourself a member of a community where gay and straight folks alike may berate you, or distance yourself completely.

Bisexuals—especially young people—are told repeatedly that their identity is a phase, a temporary confusion or a sudden awakening of the libido. If and when a bisexual person settles down with one partner, no matter that partner’s gender, someone will inevitably retort, “I told you so!”

Bi folks are, thus, faced with a tough decision: Declare yourself a member of a community where gay and straight folks alike may berate you—or distance yourself completely.

In a society that’s come so far in celebrating lesbians and gay men, the rigid stereotypes that keep bi folks closeted have hardly budged. No wonder only 28 percent of adult bisexuals are out to the important people in their lives—compared with upwards of 70 percent for gay adults.

It’s because there’s no rubric for bisexual adulthood. Who do you date? Do you get married? Are you a “bad bisexual” if you support lesbian- and gay-dominated organizations? Bisexual community leaders are barely mentioned in conversations about LGBT equality—especially if they have different-sex partners. Yes, marriage equality affects us; no, that doesn’t make us gay.

Openly bisexual celebrities and politicians are more visible than in decades past, but there are only a handful compared to the number of out lesbian and gay icons (or those who choose not to label, but publicly date a same-sex partner).

Even so, the pool lacks diversity. Men, transgender people, and people of color have been organizing around bi communities for decades, but the face of Hollywood bisexuality is primarily female, cisgender, and white. Bi advocacy organizations do fantastic work, but according to the LGBT Funders Report, they receive 0.0 percent of funding from LGBT-focused grantmakers.

And without a doubt, bisexual young people recognize the lack of possibility models. When I was a closeted 17-year-old, I noticed. That invisibility makes it harder and harder for many other youth coming to terms with their sexuality to value, accept, and take care of themselves—and the consequences are devastating.

Last year, the Human Rights Campaign and three bisexual advocacy organizations released a report outlining the specific experiences, needs, and concerns of bisexual youth—from ages 13 to 17. Almost across the board, the health and wellness problems that plague LGBT young people are even worse for bi teens.

Compared with their lesbian and gay peers, bi youth reported much lower levels of happiness and less optimism about their future relationships, college, and careers. Forty-four percent of bi teenagers reported having a supportive adult in their family to talk to, compared with 54 percent of lesbian and gay teens. They were more likely than gay and lesbian youth—and twice as likely as straight youth—to have experimented with drugs and alcohol. The stats get even more dire for bisexual adults, who face striking health disparities from cancer rates to depression.

This is an incredible opportunity for bisexual adults to declare themselves, join the conversation and volunteer their names as role models for bi youth.

Bisexual youth who don’t feel welcome in queer spaces won’t seek out queer resources. They won’t muster the courage to stop by the Gay-Straight Alliance meeting or visit the LGBT community center. They’ll ignore what little information is available about LGBT sexual health. They won’t grow into healthy, flourishing bisexual adults. Those of us who have made that leap know it’s possible, but if we don’t show kids that you can be a bi grown-up, who will?

Bisexual Awareness Week is an important step toward visualizing that kind of adulthood—one where bisexual adults aren’t written off based on their partners and are welcomed into LGBT spaces as their full selves. This is an incredible opportunity for bisexual adults to declare themselves, join the conversation, and volunteer their names as role models for bi youth.

But there’s more work to do, and it needs to happen more often than one week a year.

We need specific data collection focusing on bisexual community needs, affirming and competent healthcare, and representation in mainstream LGBT organizations. We need comprehensive, bi-inclusive sex education, and more television and movie characters who claim the word “bisexual.” We need active representation in every conversation about LGBT equality—not just those pertaining to bi issues—and we need to reserve a place at the table for bi youth to tell us what they need.

And most importantly, we need more people to follow Evan Rachel Wood’s lead—reminding us that even celebrities face the inner turmoil we do and reassuring us that those feelings are valid. Advocacy around Bisexual Awareness Week is a way to build that momentum, but it must continue even after we put away our bi pride flags.

The last few years have shown great promise for bi visibility and affirmation. It’s on us to keep it going.

Camille Beredjick is a New York-based writer, blogger and LGBT advocate. She works at an LGBT nonprofit, where she focuses on youth engagement and outreach. She runs an LGBT news and media blog, GayWrites, and an LGBT-focused YouTube channel of the same name.