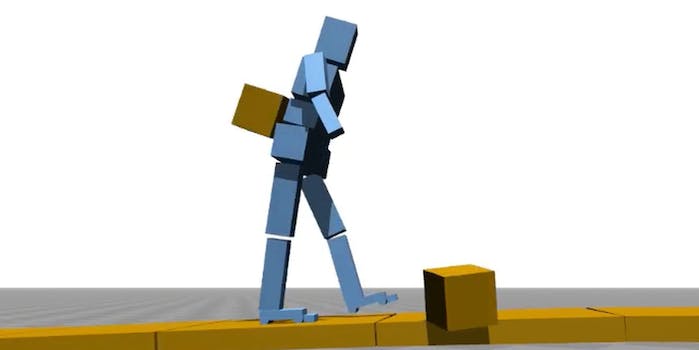 This computer learning to walk is a great metaphor for life

Watching a baby take its first steps is a timeless, heartwarming event. But what about a computer sim?

Watching a baby take its first steps is a timeless, heartwarming life event. But what about watching a computer simulation learn how to walk?

This video from late 2013, titled “Flexible Muscle-Based Locomotion for Bipedal Creatures,” shows how different generations of computer simulations evolve, and eventually learn to walk on two legs. The engineers run the sims through different obstacles, including a Wipeout-like course in which brown blocks are thrown at a sim walking on a narrow plank, until a giant block finally causes it to fall off.

Seeing these semi-sentient beings attempt to walk, run, and fend off boxes is unintentionally funny. But if robots will eventually rule us in the imminent technodystopia, hopefully they’ll engage in some physical comedy for our amusement.

Or maybe they’re getting that all out of their system now.

On Reddit, where the video appeared today, a thread has unspooled about how these awkward computer simulations are appropriate metaphors for life (see above), and how their movements resemble a vintage video game. “Oh my god they even do the Mortal Kombat idle animation wiggle,” said one.

It’s all lulz until there’s a robot boot on your neck.