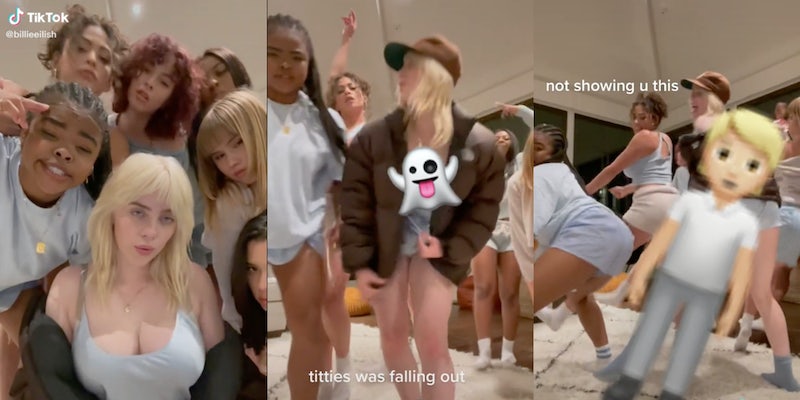 'She looks much more comfortable with herself.'

In a viral TikTok video Friday, Billie Eilish had a casual wardrobe malfunction with her “titties falling out.” Unabashed, the 19-year-old singer continued performing the choreographed TikTok dance with six other women.

After unveiling her new single “Lost Cause” on Wednesday, Eilish performed a recreation of the slumber party-themed music video on TikTok. Wearing a plunging silky pajama top led her to unintentionally expose her chest more than once while dancing.

The Grammy winner captioned the TikTok video, which has garnered almost 7 million likes, “titties was falling out” and covered up her wardrobe malfunctions with large emoji.

At the end of the dance, Eilish and her crew turned around to twerk at the camera, and her short silky shorts rose too high, which she again covered up with an emoji. “Not showing you this,” she joked.

The TikTok was warmly embraced and applauded by fans. “She looks much more comfortable with herself,” one wrote.

“U LOOK SO HAPPY OMG,” another said.

“SHE HAS HUMOR YOUR HONOR,” a third wrote.

During her rise to fame, Eilish became known for wearing baggy, non-revealing clothes, which she has said was to avoid body shaming.

But in early May, the singer debuted a new, more revealing style on the cover of British Vogue. The shoot, which was reportedly Eilish’s own idea, showcased a variety of vintage-inspired pinups and corsets.

“Showing your body and showing your skin – or not – should not take any respect away from you,” she said in the interview to accompany the shoot.

So it makes perfect sense that she didn’t make a big deal about a little titty slip on TikTok.