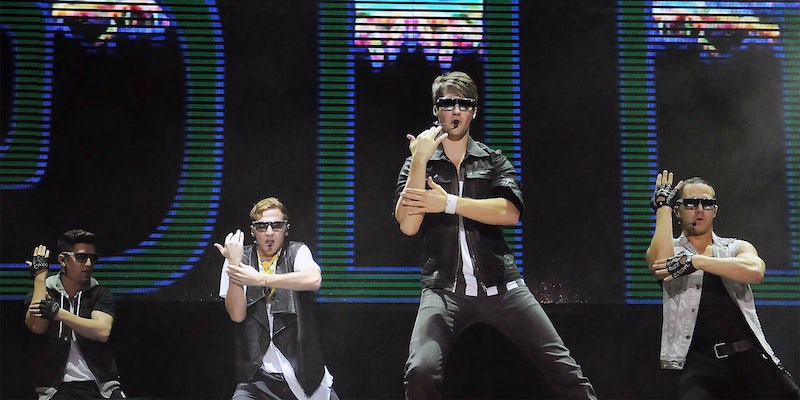 Nickelodeon boy band Big Time Rush is under fire this week, after failing to cancel a show despite one member testing positive for COVID-19.

Lead singer Kendall Schmidt skipped Saturday’s New York City concert due to a positive test result, but the other three members went ahead, sparking backlash from fans. The band even participated in a meet-and-greet for VIP ticket-holders.

After starring in the Nickelodeon musical sitcom Big Time Rush from 2009-2013, the band have continued to tour alongside their own solo music and acting projects. Their fanbase is still going strong, but judging by the reactions on TikTok, many were shocked and disappointed that Big Time Rush didn’t cancel their Saturday concert.

“When I see Kendall from Big Time Rush tested positive but they continued to do the meet & greet/concert anyways with the other 3 even tho Carlos is unvaccinated and needs to quarantine for 14 days,” wrote one fan on TikTok. (We have reached out to the band for comment on Carlos PenaVega’s vaccination status, and the response to Saturday’s show.)

Another TikToker posted a firsthand account of attending the New York show. @spicybakedbeans describes arriving around 3.30pm for the 8.30pm show, and being let inside at 4pm as a VIP ticket-holder. She and her friends were told by the band’s tour manager that refunds were available, but the show would still go on.

“Some people started yelling like, why is the show going on, they were all exposed,” she continued. “And the tour manager was like, oh no they weren’t, they all got negative tests.”

But as this TikToker points out, the other three members of Big Time Rush were surely exposed because they’re all touring together, and therefore run the risk of infecting people despite testing negative.

She added that the meet-and-greet went ahead with the remaining three singers, but that she and her friends chose to go home. When they left the venue, there was a long line of fans waiting outside, none of whom were aware that one of the band members had recently tested positive. “Some girls we talked to had been there since like 9am,” she said.

The band still hasn’t posted about Schmidt’s covid status on social media. Big Time Rush and Kendall Schmidt’s Twitter and Instagram accounts have only posted generic celebrations of the current tour – but the replies are full of complaints about the NYC show, criticizing the band for putting fans at risk.